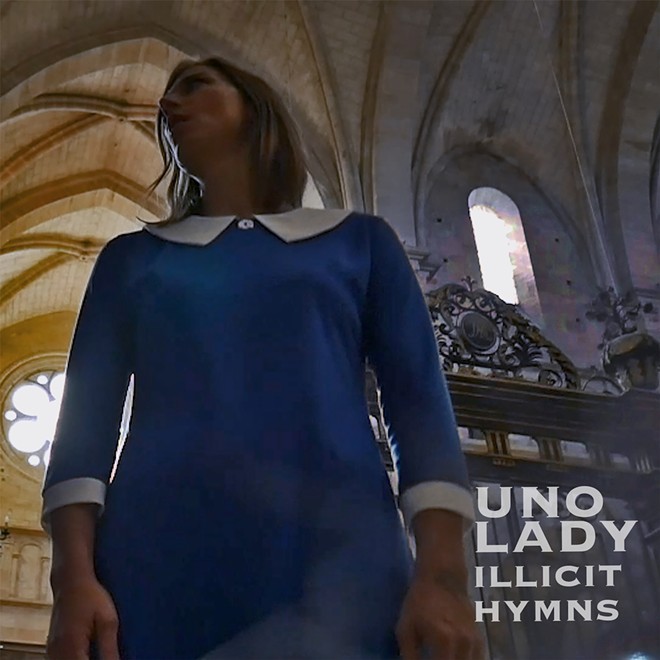 The album is appropriately titled, “Illicit Hymns” and is available for purchase at bandcamp. There are four accompanying videos for these tracks with three yet to be released.

What began as a two-week artist residency at Chateau Orquevaux in rural France where she lived in a mansion with twelve other artists turned into a live album. During this residency she visited Eglise Saint André, a church in Orquevaux where she was allotted a last-minute opportunity to do an improvisational singing session while the other artists drew during this small window of time. Since this Eglise Saint André session was permitted it is not a part of the unauthorized hymnal album. She belted out with the encouragement of another residency artist who said, “What are they going to do, ask you to stop?” Ebert decided to tote her ‘pipes’ guerrilla-style into other cathedrals, spawning this series of performances yielding impressive results.

“I shook my shyness, took up space, and made some noise,” said Ebert. “The church was built before electric amplification was invented. The construction of these spaces was meant to carry voices. The sound was phenomenal and the reverb resonated through my body. Next we visited Cathédrale Saint- Mammès de Langres located in Langres, France. Construction of Langres Cathedral began in the 11th century. The architecture was stunning and the acoustics were amazing.”

The album is a meditative prayer to humanity. Uno Lady’s Judy Garland-esque vibrato is as peaceful as a mother’s lullaby and as seductive as a siren’s song. The breaths taken in-between the swaths of human utterance allow the distant echoes to resonate through the cathedral and to come forth offering a serendipitous call and response leaving the listener’s hair standing on end.

“The spaces shaped the sound,” said Ebert. “The specific echo and excitement of each experience made the melody. I had never heard or sang these songs before. If I had scheduled a show, or gotten permission this would have been a completely different performance. These pieces would have never existed. This trip was the first time I focused all my attention on art. It was an exploratory experience. It was a quest to honor and follow my intuition. It was life-changing and shaped my decision to pursue my creative calling.”

Aside from this Chateau Orquvaux artist-in-residency, Ebert has been granted a Creative Workforce Fellow, is an Akron Soul Train fellow, and a Panza Foundation awardee. Along with several singles and cover songs, Ebert has recorded and produced six releases, including her mindfulness album and film series “GROUNDED."