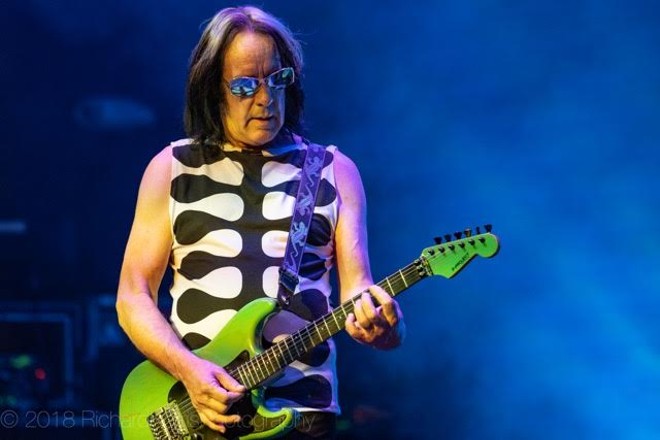 Richard Kerris
Earlier this year, Utopia singer-guitarist Todd Rundgren [pictured] had just performed a showcase at South by Southwest and was traveling back home when he got the news that keyboardist Ralph Schuckett wouldn’t be able to join the group on its anticipated reunion tour.

“Ralph developed an exotic condition that required an equally exotic sort of treatment,” says Rundgren via phone from a St. Louis tour stop. Utopia performs at 8 p.m. on Saturday, May 19, and at 7:30 p.m. on Sunday, May 20, at Hard Rock Live. “He would be knocked out for two or three days after treatment or whatever it was. That made it impossible for him to tour. He just wouldn’t be able to get on stage. Ralph would have to stay home and two weeks before rehearsal, we had to find a keyboard player. At that point, I was ready to walk into the ocean and not come back. We were two weeks out and needed to find someone Utopia-ian enough.”

Rundgren says the initial reaction was to call upon studio players who might be able to fill in. He didn’t like that idea.

“I thought that it’s like putting the emergency spare tire on that go can only go 50 miles,” he says.

Instead, the band posted the job opening on Facebook and began to take submissions. Rundgren also called his son, who’s a musician, to see if he knew anyone who might be up for the task.

“I asked him who the best keyboardist player was that he knew,” he recalls. “He said, ‘Gil Assayas.’ He said it right off the bat. I never heard of him, so I started exploring. He left evidence all over the place of what he could do. There was a 15-minute interview with him so you could see he was a normal person. He had all of the chops. He had a strong voice, and everything we were looking for. No one else exceeded what we had with Gil. Gil got the gig, and it’s been working out great. He’s something of a phenom. You’d have to be. A week after we sent him all the material, he learned it all. He not only learned all the stuff we sent him, but he knew the stuff that required three keyboard players. He didn’t know there were three keyboards on it.”

Rundgren describes Utopia, which first formed back in 1973, as an “organic thing.” The band evolved from the group of musicians who helped Rundgren record his 1973 solo effort A Wizard, A True Star.

“We were playing the Utopia theme before we made the first record. That’s why it’s a live version on the first record. It was everyone sitting around the studio, talking about different ideas. We would throw everything in a pile on the floor and see how they fit together. It was democratic except for the fact that I ended up writing all the lyrics. That’s mostly because the Utopia concept required a lyrical concept. It was up to me to figure out what that concept was.”

One review notes that “The Ikon,” a 30-minute song that goes through a number of time signature changes and alternates between jazz fusion-inspired guitar and keyboard riffs and Rush-like prog rock jams, could be an album itself.

“I don’t know we set out to do a whole side like that with ‘The Ikon,’” says Rundgren. “Part of the idea with the studio was to take advantage that we could experiment and do what we wanted with the equipment, so it made sense for us to try to do something more expansive than the typical thing. Parts of it were pre-existing pieces of music that they had come up with. We found a way to glue them to the larger thing.”

The band would split in 1986 only to reform six years later for a tour of Japan that Rundgren says he thought would be more expansive but didn’t because of “lingering issues” and the fact that some band members had to still hold down day jobs.

“You can’t just quit your job to reform a band,” says Rundgren.

Rundgren couldn’t commit to recording another Utopia studio album in the wake of this reunion tour but says he's been pleased with the outpouring of support from fans.

“I can’t imagine at this point how [a studio album] gets done, but it doesn’t mean it’s not possible,” he says. “Our attitude has been that it’s hard enough to get this tour together. We haven’t done a tour in almost 35 years. We don’t know what kind of demand there is for it now. We’re doing alright now. When we get to the end of the tour, we’ll make an assessment of what’s happened and see what we want to do next. We don’t want to start speculating on what else will happen until we’ve successfully concluded this phase.”