They're Not Here, But Four Months Later, He Still Is 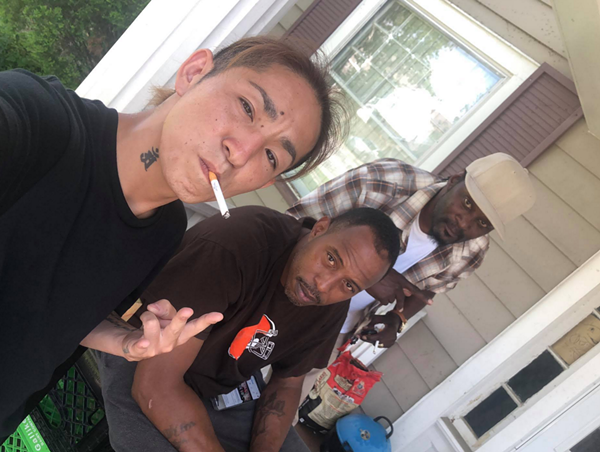 This tale, one of the more bizarre stories you're bound to come across this year, begins in June.

That's when the local police scanner Twitter account @NEO_Scan tweeted: "Other - E99/St Clair - #thingswehear A very agitated fellow from Japan flew here on promise that he'd meet Bone Thugs 'n Harmony, CPD used translate app to arrange with someone on Facetime who will arrange for him to meet the band members."

The police report for the call, which happened at about 11:20 a.m. on June 25, showed that the cops were summoned not so much because the gentleman in question was agitated but because the caller said the gentleman "didn't fit the area" and had large amounts of cash on him and she was worried he was going to be robbed.

Anyway, a nifty little bizarre police scanner tweet that, by its telling, appeared to end in a happy resolution: Whoever this guy was, someone was gonna help him meet Bone Thugs.

Until this week, when, thanks to an interview with Fox 8, we learned that the Bone Thugs superfan was still in Cleveland, that his visa had expired, that he didn't want to go home, and that he'd been, essentially, adopted and cared for by a guy named James Norton and others.

Norton, when asked by Scene to begin his story of how this all came to be, laughed before recapping the last four months of his life with Ryo Muranaka.

"Well, he sold his possessions, bought a ticket, and came to America," Norton said. "You're in a different country, you believe what you hear, and for him, he came to Cleveland and went to E. 99 and St. Clair wanting to meet his idols, like they would just be standing there all the time."


And those fears about him being robbed? Well, they were right on. Because he just stood on the corner, where he appears to return often, for two or three days, waiting for the band to show up.


"He had this parka on and he had his Louis Vuitton luggage, and that stuff might be cheaper to buy in Japan or whatever, but it's expensive here, so he got robbed for his luggage," Norton said.

At this point, Norton told Scene, "one of the homeboys that stays in the area took him in, and he ran into another homeboy, Kwas Bibbs, who's affiliated with Bone Thugs, and we knew each other and I grew up with Layzie Bone so he kind of got hooked up with me. I took him in — it was only supposed to be for one night — and he's still with me after three months."

Why, anyone would ask and we did, would someone randomly take in a complete stranger in an open-ended arrangement? Ryo didn't want to go back to Japan. He had nowhere to go here. He wasn't on a work visa, and had no money left.

"I did it because he got robbed, because he's on the streets, and because it's easy to die out here," Norton said of Ryo, who is a rapper himself who hoped to pass along his music to Bone.

Initially, they communicated entirely by using Google translate. Then Norton began writing down American phrases on flash cards and helping Ryo learn to pronounce them. It hasn't been much, but "he's developed a way to speak," Norton said.

What he hasn't done is meet members of Bone, who not only don't stand on the corner of E. 99 and St Clair but don't even live in Cleveland.

And what he doesn't have anymore, besides his Louis Vuitton luggage, is a valid visa — his expired in late September. Norton said attempts to reach the United Way and elected officials haven't brought any resolution.

"You're from a different country, but you're still a human being," Norton said. "The goal now is, because he is talented, because he can rap, because he has numbers on YouTube, to try and generate a way to get a work visa set up that would allow him to stay and work and use his music. He said he doesn't want to go back. He said he was born in Japan and will die in America."

Attention to the story brought by Fox 8's interview could be good, and could be bad. ICE could come and pick him up any day. Or, someone could help get his paperwork figured out.

They really had no options left though, Norton said.

And yes, he still loves Bone Thugs. And they love him.

Krayzie Bone told Fox 8: “When we left Cleveland, we just got on a bus and got one-way tickets to Los Angeles. He took it to a whole ‘nother level. He left an entire country.”

They just wish he had a better strategy from the start.

"But I will also say this to other fans and artist that are looking to do the same thing as us or this gentleman did — follow your dreams by all means, but you have to be very careful when you go to places you know nothing about," Layzie Bone told HipHopDX. "We’re not from the suburbs, we’re from the ghetto. The area we grew up in is not nice by any means, and I'm just thankful all they took from him was his luggage and not his life because it gets real like that. So, be very careful and have some kind of plan."