A Survey Will Help Create an Official Theme Song for Cleveland and Akron, There's No Way This Could Possibly Go Wrong 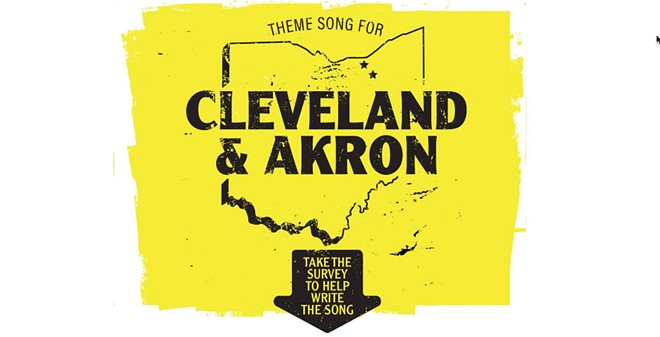 A commission partnership between the Rock & Roll Hall of Fame and the upcoming art triennial Front International is creating an official theme song for Cleveland and Akron. Why they've chosen to put both Cleveland and Akron together in one song is beyond me, but that's the way this commissioned work wants it.

The lyrics and music will be compiled by filmmaker and writer Jonn Herschend and composer Silas Hite (nephew of Devo's Mark Mothersbaugh), and will be performed by yet-to-be-named local musicians.

In an interesting decision, the song will be "written" by the citizens of Northeast Ohio by the answers provided through an online survey. Did we mention this survey allows for users to fill in the blank and provide answers for anything they want?

Once the song has been completed, it will premiere as a music video at the Rock Hall in July and run through the end of September.

We hope that everyone participating in the survey is mature enough not to put "Your Mom" or "LeBron James" for every answer, but our hearts are with whomever has to weed through all of the ridiculous nonsense submitted through this survey.

We didn't even know Cleveland needed a theme song. Michael Stanley Band's "My Town," and The Presidents of the United States of America's "Cleveland Rocks," have been doing just fine.