Absurd at Any Speed

In the parallel universe of Ohio, car insurance laws collide with common sense. 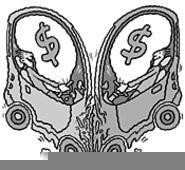 Craig Austin and Janet Meden probably never saw the car that killed them. The Mazda driven by Scott Leiendecker blew past a stop sign and slammed into Austin's sedan along State Route 306. Geauga County authorities would charge Leiendecker with aggravated vehicular homicide, alleging that the three-time DUI offender had a blood-alcohol content twice the legal limit.

OSI Sealants, the Mentor company that employed Austin and Meden, probably never saw the lawsuit that was coming next. Even though the two co-workers were neither on the job nor driving a company vehicle when the collision occurred, their families sued OSI's three insurance carriers over the May 2001 crash.

The gambit paid off in a big way: Last fall, a Cuyahoga County jury ordered the insurers to fork over $5.6 million in damages.

The verdict would defy logic -- and the law -- in any other state. Not so in the parallel universe known as Ohio. The jury's decision hewed to a state Supreme Court ruling that enables accident victims to collect car insurance claims under their employer's policy -- no matter if they're off work and in their own car.

It's a ruling that critics assert has triggered rising premiums, punished business owners, jammed the courts -- and tarred Ohio as the place where common sense goes to die.

"The Supreme Court shredded the Constitution," says Ty Pine, assistant state director for the National Federation of Independent Business. "They committed nothing short of an atrocity."

He's referring to the court's decision four years ago in a case that, among insurance types, evokes the theme from Jaws. Christopher Pontzer, who worked for a Canton dairy, died in a 1994 collision while driving his wife's car on a personal errand. The man blamed for the wreck carried liability limits totaling $400,000. Seeking greater damages, Kathryn Scott-Pontzer sued Liberty Mutual, the dairy's insurer, arguing that the company's policy covered her husband's off-hours travel.

She lost in common pleas and appellate courts, on the presumably obvious grounds that Christopher Pontzer didn't die while working. But the Supreme Court bucked conventional wisdom by finding that, in essence, an employer's auto coverage applies to its workers at all times. The court held that Liberty Mutual's commercial policy "contained no language requiring that employees must be acting within the scope of their employment" to qualify.

The rationale drew a collective "duh" from the industry -- such language was absent because nobody imagined that a company's insurance needed to cover a guy's Sunday trip to the store. Regardless, the court's decision has spawned thousands of similar claims, whose statewide havoc leaves business and insurance execs bemoaning what they call Hurricane Scott-Pontzer.

"It's the largest man-made catastrophe this state has ever faced, from an insurance perspective," says Dan Kelso, president of the Ohio Insurance Institute. The trade group estimates the state's 600 auto carriers have absorbed $1.5 billion in Scott-Pontzer liability claims. "Nothing else comes close."

The Supreme Court soon followed its decision with another that had insurance reps again reaching for the scotch. This time it extended company coverage to workers' family members involved in crashes.

Few may shed tears for an industry with revenues greater than Africa's. Still, insiders fault the twin rulings for the recent spike in Ohio's personal auto premiums. State figures show the annual average rate jumped from $645 in 2000 to almost $700 last year, with no plateau expected in 2003. Businesses also have felt the blowback, with some commercial premiums more than doubling. Pine tells the horror story of a small trucking outfit near Cincinnati, whose annual policy costs swelled in three years from $70,000 to $400,000.

"Instead of companies being able to reinvest money in new jobs or pay raises or better health benefits," he says, "it's going to insurance."

Adds David Hansen, a lobbyist for the Ohio Manufacturers Association: "Anyone injured in a car accident deserves compensation -- from personal coverage. But Scott-Pontzer has mostly been a financial boon for lawyers. It's a complete raid on industry's deep pockets."

Yet lawyers who handle Scott-Pontzer claims rip insurers for writing vague policies that fail to specify who's covered. The industry defends its reliance on standardized forms as a way to make policies consistent from state to state; attorneys counter that insurers want to avoid the costlier option of drawing up their own contracts. Which is fine, Cleveland lawyer Paul Flowers says, except that carriers then mewl about the courts drilling them for ambiguous language.

"These insurance companies are collecting billions of dollars for their premiums, yet they can't sit down and draft a policy that's clear and understandable. I have no sympathy for them."

Flowers represented Janet Meden's family in the Leiendecker case. He contends that, without the Scott-Pontzer claim to wedge against OSI's three carriers, the victims' survivors would receive next to nothing. That's because, while the jury directed Leiendecker, 49, to pay punitive damages of $5 million apiece to the Meden and Austin estates, he's unemployed and suffering from terminal liver disease.

Meanwhile, the insurers hope to pay as little as Leiendecker -- they plan to appeal, says defense lawyer Jonathan Phillips. Disputing the charge that Ohio carriers skimp on contract details, he wonders whether plaintiffs' attorneys would finally be satisfied if policies identified a client's hair color and shoe size. "Forty-nine other states don't seem to have this problem. What does that tell you?"

The Ohio Legislature sought to neuter the Scott-Pontzer ruling two years ago by creating a law that exempts employers from liability in workers' off-the-job crashes. Senator Scott Nein, the Middletown Republican who authored the bill, says lawmakers needed to act before premiums exploded. "If [carriers] have to keep paying so much money on these lawsuits, guess where it's coming from?" he asks. "You, me, and every other policyholder."

But if the Supreme Court left the planet with its Scott-Pontzer decision, the General Assembly didn't exactly yield to gravity -- or reason. The statute only affects policies written after October 2001, so Scott-Pontzer claims will flood the courts well into the next decade. In Cuyahoga County, thousands of such suits simmer on court dockets; Flowers alone says he's juggling 50 cases.

More dramatically, the new law also nixed a state proviso that required carriers to offer uninsured and underinsured motorist coverage to customers. Stripping that clause from the Ohio Revised Code "was a radical response necessitated by the radical measures taken by the Supreme Court," Nein says.

But Senator Leigh Herington (D-Ravenna) predicts the move will hit Ohioans harder than the higher premiums fueled by Scott-Pontzer claims. He warns that more drivers may take to the road without uninsured coverage, leaving the state -- i.e., taxpayers -- to absorb the medical bills if they're injured in a crash.

"These people will become, by virtue of not having the coverage to pay for their own hospital care, wards of the state," Herington says.

Though insurers grouse about Ohio being the lone state saddled by Scott-Pontzer, they're quieter about Michigan being the only other state without a law mandating uninsured coverage. Richard Mason, executive director of the Ohio Trial Lawyers Association, sees dark humor in the contradiction. "You don't hear insurance companies talking about 'the public's best interests' when it comes to uninsured policies," Mason says.

Carriers insist that uninsured coverage remains a regular part of their pitch to customers, for the simple reason that such policies bring in money. Yet they believe the Supreme Court gave legislators no choice except to kill the uninsured requirement -- the Scott-Pontzer ruling had led some carriers to stop writing commercial policies.

Dan Sondles, spokesman for The Westfield Group, the state's second-largest commercial insurer, says his company's $50 million reserve for Scott-Pontzer claims has gone dry in three years. "We never anticipated this sort of claim. No one did."

Ohio lawmakers, reacting to Supreme Court rulings, have amended the state's car insurance statutes five times in the past decade. Given the to-and-fro between the judicial and legislative branches, it might seem remarkable that Ohio's personal auto premiums still rank seventh-lowest in the U.S., more than $200 below the nation's $912 average. Or, given the bouts of absurdity on all sides, the low rates might seem like something else entirely: an accident.

"The whole thing," Herington says, "has kind of been a mess."