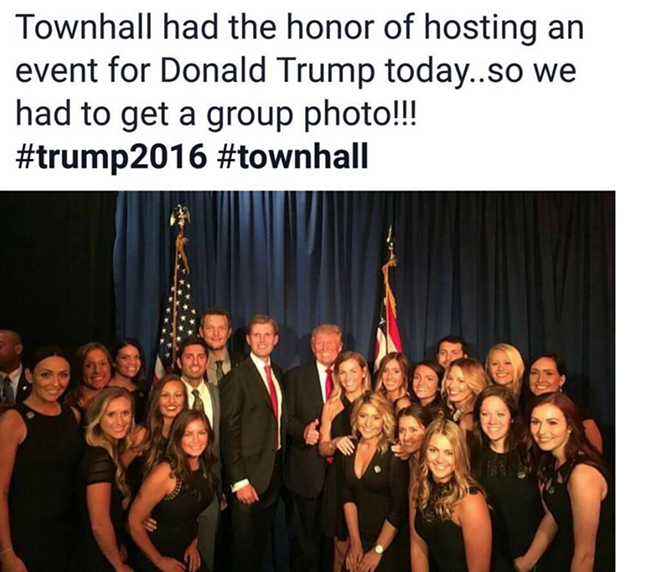 TownHall, the certified non-GMO and veg-friendly Ohio City restaurant owned by Bobby George and others, is among the more popular joints in the city — astoundingly successful, a favorite hangout of local athletes and coaches, and a venue for assorted events.

In that regard, the Trump fundraiser, held last Thursday afternoon, was far from an anomaly. TownHall has hosted events for Democrats and Republicans alike, as well as fundraisers for organizations such as the Providence Children's Home and Feed the Need.

But Trump is no ordinary candidate, this no ordinary election. And cautions about politics at the dinner table, whether it's at home or out, are true for a reason.

The event was organized by a host committee including local businessman Tony George and Cuyahoga County GOP chairman Rob Frost. Tony George is the father of Bobby George, one of TownHall's owners. While the family and business relationships overlap, they've attempted to maintain distinctions publicly in the leadup to the event..

Bobby George, for instance, was initially listed as a member of the host committee that organized the fundraiser on a flier. He was not on the committee, he told Scene, and a second invitation without his name was sent out. And Cleveland.com's original story on the announcement of the fundraiser named Tony George as a co-owner of TownHall, which he's not. A correction was added to the article.

Bobby George, for his part, donated to Hillary Clinton's campaign in 2015, according to campaign finance reports, as well as to Republicans Marco Rubio in 2015 and Congressman Dave Joyce in 2014. And Tony George, politically active for years supporting both Republicans and Democrats, including Bill Clinton, proclaimed Trump the next president of the United States of America during his introductory remarks at the fundraiser.

All of those interests collided last week — family, business, politics.

Because a visit from this GOP presidential nominee isn't just another example of an open door policy for both sides of the aisle. It's a visit from the human form of Facebook Uncle for president with Twitter Egg as his running mate. This isn't Congressman Tim Ryan, for instance, who held an event at TownHall (which, Bobby George told Scene, produced divisive reaction as well).

To host Trump is to host a man so prodigiously hateful that his campaign necessitates an entire editor's note appended to coverage.

And so came the reaction on the restaurant's Facebook page. 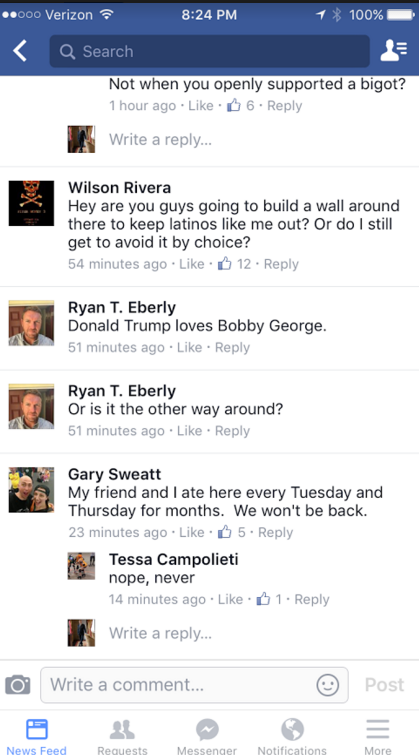 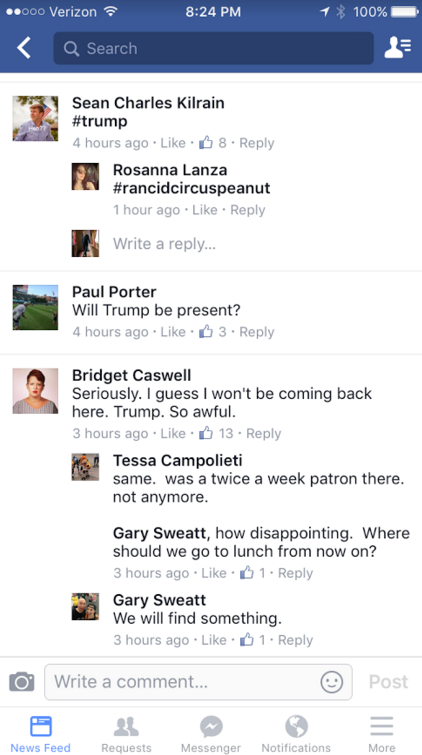 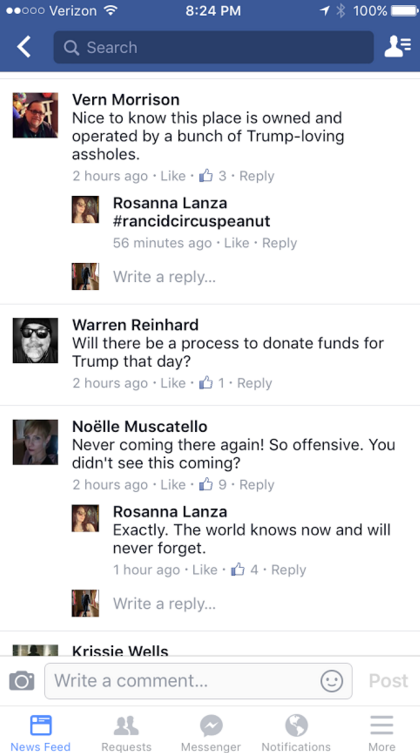 While those screengrabs, supplied to Scene last week, don't capture all of the comments made that day, they do capture the range of sentiments, from disappointment to jokes, from promises to never patronize the business again to run-of-the-mill comment section reaction. There were, it should be noted, also comments containing vulgarities and personal attacks.

Those comments and the others, however, are all gone. As the internet quickly noticed last week, comments to the page were being deleted and the page scrubbed of any mention of Trump. The deletions kicked up the reaction, accelerating the spin cycle in a predictable way.

The optics weren't great: Here's a local business proudly hosting Donald Trump and then deleting negative reaction. Here's a local business hosting a candidate who doesn't quite seem to understand the First Amendment, one who openly fights against the freedom of the press, squelching speech on its page. Here's a local business that might have expected some pushback for hosting the event then quickly realizing it had underestimated its customers (and, to be fair, non-customers, including many who don't patronize the restaurant in the first place and might have quickly seen the fundraiser as reinforcements of their opinions).

Their reasoning: The comments, which she characterized as splitting 50-50 in support and opposition of TownHall's choice to hold the fundraiser, included many that were vulgar. Because, she said, the restaurant and its social media are used by families and children, they made the decision to hide all reactions. (That's still the case as of this afternoon.)

It's not an unreasonable decision, though one that displayed a certain short-sighted understanding of how to deal with a brewing social media storm.

Bobby George was happy to explain their thinking further on a phone call. (It mirrored what he posted last week on a vegan and vegetarian FB group.)

"We hold private fundraisers all the time," Bobby George said, "for Republicans and Democrats. People do it on a weekly basis — that's why I named it TownHall."

He said he expected some reaction from hosting Trump, expected some of it to be negative, but said that there's been plenty of positive reaction as well. "Most the feedback has been, 'That's cool," or, 'I love your crepe bar and I'll be back,'" he said.

George said he wouldn't tolerate personal attacks or comments like, "Fuck this guy," on TownHall's page, though he said he did not follow the reaction specifically in this case. "If it's not about the business, we would remove it. Trump has nothing to do with our service and product. People can support Hillary or people who support Trump, I don't give a shit. My job is to run a great establishment."

In the call, he also echoed sentiments he had posted online, which said: "We wanted to create an open environment where people would not be judged for speaking their opinion. That is what makes this Country so special. We would love the opportunity to host Presidential Candidate Hillary Clinton and we are working towards getting this done. In fact I have donated to Hillary's Campaign for what it is worth. I love my business, employees and customers and do not want to do anything that would effect our ability to continue to thrive. I was hoping this FB group would see it with the same positive view that I did. Also, for those of us that our passionate about our FOOD SUPPLY, we must not alienate from any party or we will lose our voice."

In his view, his business held an event, not an endorsement rally. He wondered how it was any different than the local businesses and restaurants that did private events during the RNC.

(One difference might be the view that the RNC was an economic driver for the entire city as well as a crowning civic moment in the national spotlight, as opposed to a one-off event two months out from the election.)

Regardless, George said he knows some people have said they'll never come back to his restaurant. That's their choice, he said. But he sees things going the other way and, for  his part, he's going to keep focusing on their food and mission and employees.