Any Reason to Care the Cavs Are Still Winless in Preseason? No, But We Still Have Concerns 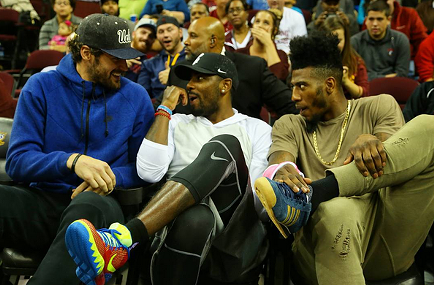 Emanuel Wallace
If watch gears moved like downtown traffic, it might describe the fits and starts of the Cavaliers preseason offense. At times, things are clicking, but those times inevitably end, generally short of the basket. It’s way too early to start worrying, so just take it and file it away for later. In six months no one will remember the Grizzlies beat the Cavaliers last night, 91-81.

Blatt dismissed the game as “not one of the better ones,” noting the team’s listlessness. While it’s certainly been heartening to watch the Cavaliers actually run Blatt’s movement-oriented schemes rather than get bogged down in one-on-one hero ball, the results have been lacking.

Unlike last year, it doesn’t seem to be a matter of players being committed to the scheme so much as getting in sync with each other. The Cavs committed 11 first half turnovers as many passes – particularly interior ones – were intercepted or fumbled. Backdoor cutters were below the reception and the loose ball would bound to the Grizzlies.

The defense didn’t necessarily look bad so much as the Grizzlies looked much crisper. Of course, that starting lineup spent all last year playing together.

“We just need to read each other better,” said Mozgov afterwards, discounting the impact of the Grizzlies big front line. “It’s a lot of things. It’s not gonna matter right now who we play against, it’s a matter of what we do on the court.”

Starting wing Richard Jefferson (with James ostensibly playing SG allowing Mo Williams and J.R. Smith could rest for tonight’s back-to-back against the Bucks) just came here. Varejao has never played with center Timofey Mozgov, who arrived mid-season, and while Sasha Kaun played with him on the Russian National Team with Timo, Kaun doesn’t know any of his other teammates.

However reasonable the team’s struggles, it’s still a bit disconcerting. While Delly, free agent rookie Quinn Cook and former Cavaliers 1st rounder, Jared Cunningham all played the point, only Cook’s a natural distributor, making things that much tougher. That said, the team took advantage of the situation, having Cunningham (more naturally a “2” guard) bring the ball up and run the point at times.

“He did a good job. He got out there and played with good pace and energy,” said Blatt of Cunningham, who finished with 13 points. “We were without Mo tonight and we wanted to get a look at Jared at the point a little bit and I thought he did okay.”

Of course, Cunningham would only really need to bring the ball up because once into the frontcourt, the offense goes through James. We saw several plays with LeBron in the post, which was not necessarily unusual, but seemed especially effective last night. It’s something we saw a lot of in the playoffs, and Blatt hasn’t lost that thread.

We asked if we’d see a lot of that this season. “I would suspect so,” Blatt said. “Obviously we played him down last season with great success so you can probably expect to see that.”

On this play LeBron splits the defense to get an easy layup.


There isn’t much more to say about this one. The team fell into the same overzealous 3-shooting for the first three quarters, finishing with over 40% of their shots coming from beyond the arc. Only in the fourth quarter did they finally, effectively, start taking it to the basket, getting 13 free throws in the quarter as they narrowed the lead to 2 before ex-Dukie and questionable jumper-shooter Cook took a three off the bounce.

He missed, the Grizzlies went back and scored to push the lead to 3 then scored again. Cook just doesn’t have enough offensively to make it in the league, though he has a nice handle and some court vision. Austin Daye can score, adding 7 more last night, but is thing as a wishbone. A gold-plated paperweight has more ballast. That leaves that 15th spot to Cunningham, and he seems to know it. He made the best of his opportunities and got to the line 10 times including this beautiful slam.

The Cavs get a chance to score their first victory of the preseason during their first game at the Q. We’ll be there, and you can follow me on twitter @CRS_1ne.