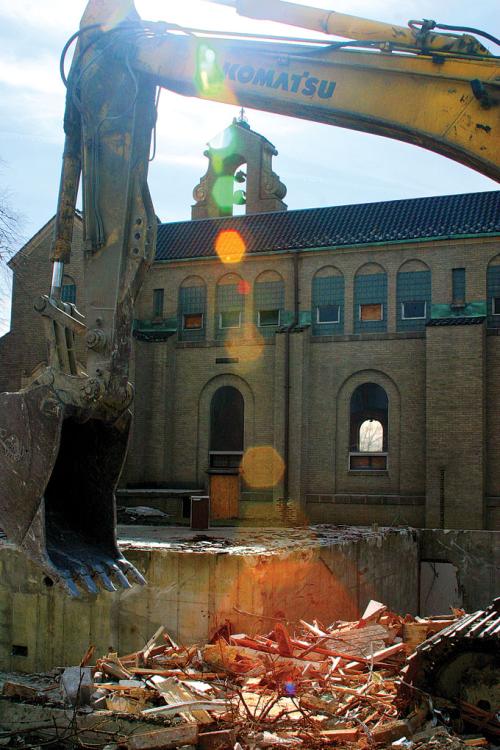 When my colleague Michael Gill wrote about the grand, historic churches that have been or will be abandoned in the Archdiocese restructuring, he acknowledged the thorniness of a so-called "lapsed" Catholic weighing in on church affairs. But he went on to explain why it's his business — indeed, everyone's business — given the very public roles parishes have always played in their communities.

For some of the same reasons that you can pick up bargain real estate in the city, the same reason the factories stand empty, soon there will be a whole bunch of closed churches. The free-market system that pits city against city has pulled us apart as a society. Our failure to control our development and our eagerness to discard rather than maintain and repair has at least enabled, if not encouraged, us to move farther away from each other, building more buildings as we go. And now the diocese's leadership is following its flock, following the market into exurbia.

Like many businesses, the church is gradually pulling out of cities to follow its customers, exacerbating a trend that affects us all. Of course, this is neither new nor peculiar to Cleveland. Nor is the argument that some here, calling themselves Endangered Catholics, are making. From the Plain Dealer:

[Bishop] Lennon has said that most of the diocese's 750,000 Catholics live in the suburbs and that's where priests, who are in short supply, are needed. There are not enough parishioners, he argued, to support massive, century-old city churches like St. Procop.

Endangered Catholics disagree. Group member Bob Kloos insisted that a number of urban churches on the chopping block are viable institutions, including St. Peter and St. Emeric in Cleveland and St. James in Lakewood.

Kloos said the diocese should be seen as a family, each church a child of that family. And when hard times hit, he said, "you don't disown a couple of the kids. You say to the rest of the family, 'What can we do to keep everybody fed?'

So the argument is both emotional (invoking family and the poor) and practical (these parishes were not a drain on the Archdiocese's resources). But why stop there? There is an emotional and practical case to be made that Archdiocese — again, because it's not a business — is uniquely positioned to stand against the tide of sprawl and its overwhelmingly negative and largely ignored affects on American society.

What if Bishop Lennon were to call on Catholics to return to Cleveland or the inner-ring ’burbs? He could couch it in spiritual terms: one need not be Christian to know that Christ preached, above all else, the importance of looking out for the poor. Simply buying a house and paying taxes in a city that's been battered by population loss is, arguably, a charitable act. And if Catholics were less far flung, their priests would not be stretch so thin.

The bishop could even offer an incentive akin to the tax abatements that cities often use to lure new residents: discounted or perhaps free Catholic school education for those who make such a move. This could be funded by a surcharge on tuition for those who'd prefer to stay in the exurbs. More charity, and what good Christian would argue against that?

Knowing where they stand with Lennon, Endangered Catholics are taking their appeal straight to lay leaders at other parishes. The wisdom of choosing the defiant route seemed confirmed by the Archdiocese's spokesman's comment to the PD: "We are familiar with the letter, but stand by the previous statements concerning those parishes which are to be closed."

In other words, Lennon is done talking about it. So Endangered Catholics would seem to have nothing to lose by raising the stakes and calling on the bishop to look beyond the symptoms and consider the disease itself (and surely there are many Scripture references that would help make the point). No leader, elected or otherwise, should not to be content to preside over decline. — Frank Lewis