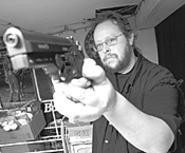 "Oh yeah, I'm a redneck kinda guy," says Sahady, bespectacled and round in his motorcycle T-shirt. "I don't take that to be no insult."

The pellet-gun range is his pride and joy, a way to indulge his lifelong infatuation with firearms between trips to full-scale ranges. Sahady fired his first gun, a .44 magnum, at age 6, and it was love at first barrel sight.

His passion for guns is such that he has little trouble associating with a group that many would see as the natural enemy of the redneck: homosexuals. The married, hetero father of one is an active member of the Northeast Ohio chapter of the Pink Pistols, the first national gun club for the gay, lesbian, bisexual, and transgendered community.

Formed in 2001 by Doug Krick, a bisexual computer engineer and onetime Libertarian Party candidate from Boston, the Pink Pistols take their name from a 2000 Salon.com essay calling on gays and lesbians to arm themselves against hate crimes. But the Pink Pistols don't train pastel vigilantes. The group -- claiming more than 40 chapters and 5,000 members -- provides a comfortable place for experienced and novice shooters to practice.

And it's not just for gays and lesbians; about 20 percent of the local membership -- which has grown from 3 to around 20 in six months -- is straight. In fact, the Pistols fancy themselves a bridge between the gay and straight communities. Or at least, between gays and gun lovers, who share this much in common: despite their considerable political clout, they are perhaps the most stereotyped and goofed-on subcultures in America.

Kim Rife, the 37-year-old Columbus-based founder of the local chapter, knows from stereotypes. With her neat boy-cut and k.d. langish looks, Rife has been verbally harassed enough times to sense whether it's just boorishness or a real threat. She encountered the latter for the first time almost 20 years ago. As she left a Columbus lesbian bar, two teenage boys -- one armed with a baseball bat -- came at her. Rife was studying jujitsu then, and after she popped them both a few times, they fled.

Since then, however, multiple sclerosis has slowed her down; sometimes she uses a cane. But that's not why she's passionate about the right to bear arms. Like Sahady, Rife is a lifelong gun enthusiast. The daughter of a former Ohio State Highway Patrolman, she "plinked" her first can off a fence at age 7. Over time, her reading of history books convinced her that shooting is not just a sport, but the basis of freedom. "I mean, if you believe in gun control as something besides hitting the target, you and Hitler have something in common." (She signs e-mails with this quote from Thomas Jefferson: "When citizens fear their government you have tyranny. When government fears its citizens you have freedom.")

Rife met Sahady through Ohioans for Concealed Carry, a group that backed the since-passed legislation allowing civilians to pack heat. He was happy to join in her cause.

Rife says that while Pink Pistols accepts straight shooters, the gay gun club was born of the assumption that gays wouldn't be welcomed on most shooting ranges. Many in the queer community believe that hetero gun aficionados are active or would-be gay-bashers, she explains.

Glenn Kestler, club director for the Ohio Rifle and Pistol Association, disagrees, but also inadvertently lends some credence to Rife's assertion. He supports the idea of the Pink Pistols, but notes that members probably would encounter a different type of scrutiny at ranges, because "a gun club is just not the place to act gay." Kestler also wonders whether by having their own gun club, members of the gay community aren't bringing that scrutiny upon themselves. "They're same as anyone else," he notes. "Why can't they go to regular clubs . . . and just act regular?"

Dan Asper of the Powder Room, a Columbus shooting range where the Pistols meet, sees them regularly. "The Pistols get along fine here with the staff and other clubs that come out to shoot," he says. "They could be members of other clubs if they wanted to, but I guess people tend to be more comfortable with whoever they are comfortable with."

Ironically, the Pistols sometimes get more flak from lefty gays than from right-wing homophobes. "We support Pink Pistols because they are members of our community," says Tim Marshall of the Lesbian/Gay Community Center of Greater Cleveland. But as an antiviolence organization, the LGBT Center doesn't endorse guns as a response to hate crimes. "For us, that doesn't make sense." And with concealed weapons now legal (with a permit), Marshall is concerned that guns find trouble.

Rife dismisses that argument. The Pink Pistols "don't encourage people to brandish a weapon willy-nilly," she says. "People shouldn't be afraid of me unless they are planning to bash me.

"I'm not gonna lose my right to carry my firearm by pulling out a gun on someone who says 'Damn dyke,'" she adds, snickering. (Permits to carry can be revoked.) "So go ahead -- get inappropriate with me all you want."

Sahady agrees. "Gay or straight, you're always gonna have someone who wants to be Billy Badass. But the thing is that if people know that gays may be carrying, it might stop a lot of bashing."

When Sahady started distributing Pink Pistols fliers in local bars, he got a little ribbing from his buddies. Now he's finding that a lot of people want to join. "At first, they were all like, 'Why are you doin' it? Why the gays?'" he says. "Most of 'em laugh about the name." He shrugs. To him, it's all about the love of shooting, not love of . . . well, you know.

"The gay members don't push their lifestyle," says Sahady. "We all just hang out and enjoy ourselves -- it's not like we get together and have a love fest."