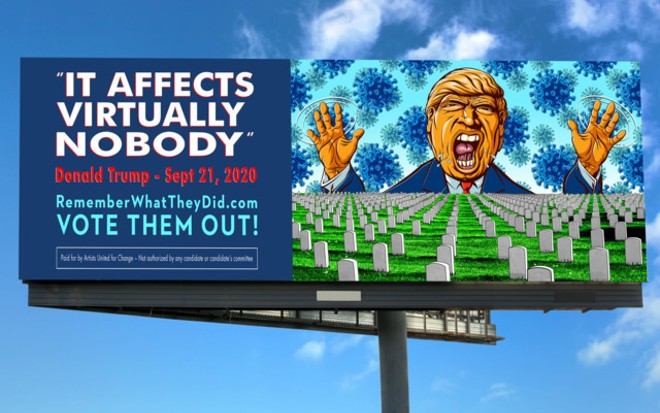 A slew of artist-designed, anti-Trump billboards are popping up in battleground states across America, including 60 spread throughout Ohio.

The street art campaign has placed four billboards in Cincinnati — with more in Cleveland, Youngstown and Columbus — calling for voters to #VoteThemOut.

According to a release from organizers RemeberWhatTheyDid.com — "a project created (by artists) Robin Bell, Scott Goodstein and Artists United for Change, a registered political action committee with the Federal Elections Commission...not authorized by any candidate or candidate committee" — "Several of the nation’s most critically acclaimed, award-winning artists created unique works focused on Trump’s failed leadership on issues like the Coronavirus pandemic, police brutality, racism and immigration, and overlaid the jarring images with some of the most reprehensible statements from Trump and his allies."

Artists include the aforementioned Bell and Goodstein, an Ohio native, as well as the legendary street artists Shepard Fairey and Swoon (who had a mid-career retrospective at the Contemporary Arts Center in 2017).

“These images are a stark reminder of the atrocities perpetrated by this President and his allies. We are connecting what has been said and done with the importance of voting. Our message is simple: Remember what they did and vote them out,” said Bell in a release.

“In late September despite an ever rising death toll, President Trump told us of the Coronavirus 'It affects virtually nobody," says Justin Hampton on RememberWhatTheyDid.com. "After flouting the science on the virus for the majority of the year and telling Americans that there’s nothing to worry about, Trump himself contracted the virus along with dozens around him after following his lackadaisical attitude toward safety in the midst of a deadly global pandemic."

Another billboard features the phrase, "That's going to sort of just disappear, I hope," and a pair of diseased lungs.

“I chose to use this quote because this thinking is mythical and dangerous. Discord continues to be sewn regarding a global pandemic and countless lives will continue to be lost due to a non-unified message with profit and politics over people," says the artist.

In addition to Ohio, RemeberWhatTheyDid has also erected billboards and other artwork in Michigan, Wisconsin, Arizona and Pennsylvania.

“Some 40% percent of voters aren’t reached by the usual political advertising and many of these voters are in communities that are underrepresented at the polls. In an election year this important, we cannot allow any of our communities to be overlooked. We are generating enthusiasm and want to take this groundbreaking program to other key neighborhoods,” said Goodstein, also a co-founder of Artists United for Change and a veteran of the Obama 2008 and Sanders 2016 campaigns.

Collective Super PAC, the SuperPAC affiliate of The Collective PAC, is also working with the campaign. The Collective PAC is "dedicated to building Black political power with candidate support and nationwide voter registration and education campaigns," says the release.

“The COVID pandemic coupled with continued police brutality brought to the surface inequities across race and gender in every facet of American life. This reckoning with America’s racist legacy has been led by young activists who have taken the movement for Black Lives to the streets. The artwork embodies the energy of these young activists in an effort to connect to communities on a visceral level and to move everyone to the voting booth in November,” said billboard artist Nekisha Durrett.

To learn more about the campaign and see all the billboards, visit rememberwhattheydid.com.