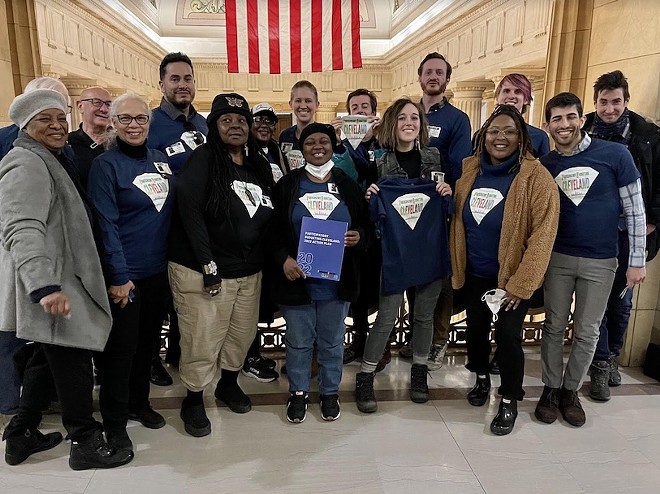 Support for participatory budgeting in Cleveland continues to grow as a group of advocates prepare to deliver a final proposal in January to Cleveland city council.

That and other topics were discussed earlier this month as more than 100 people gathered at the Happy Dog to learn more about the process.

Cleveland Mayor Juistin Bibb has expressed support and worked with PB CLE to develop the plan, proposing that $5 million in ARPA money be set aside for participatory budgeting.

While advocates hoped for $30 million or more, PB CLE is optimistic that the smaller number would still be plenty to demonstrate the benefits of a pilot program that could be approved by city council in 2023 and launched in 2024.

Jonathan Welle, co-founder of the local non-profit Cleveland Owns and part of the PB CLE coordinating committee, says that while this tool is useful for local municipalities when democracy is failing residents, it’s also a best practice when things are working well.

The basic premise presumes that residents are experts in their own community, at least when it comes to those issues most visible to them and that representatives struggle to address.

The most enticing aspect of participatory budgeting is that it historically engages more residents in voting than do general elections. On the heels of disappointing voter turnout in the midterm elections in Cuyahoga County and the city itself, PB represents a chance to connect with those who might not otherwise engage.

The reason for that, Welle feels, is that choosing to fix a playground, or addressing dangerously hectic traffic areas, are much more tangible projects to which residents feel connected as opposed to voting for a politician. The voter may feel they are exerting their influence more directly in their community.

The ask of proponents is not to have oversight over the entire budget, but rather to harness the expertise residents have in their own community for very specific needs.

Among the participants at the Happy Dog event were panelists Kenny Medrano, the Former Director of Participatory Budgeting in District 2 of NYC; Councilwoman Stephanie Howse; and Michelle Jackson of PB CLE.

They fielded questions in a Q&A session on how the structure would work, such as using a steering committee to help assemble proposed ideas from different wards that could be eligible for funding. They also described general tenets of participatory budgeting to make it successful, such as engaging residents who have had difficulty being heard by their local government.

“Our system is set up to be reactionary. If you don’t ask for anything you don’t get anything. You have to participate,” said Councilwoman Howse. “Help educate us.”