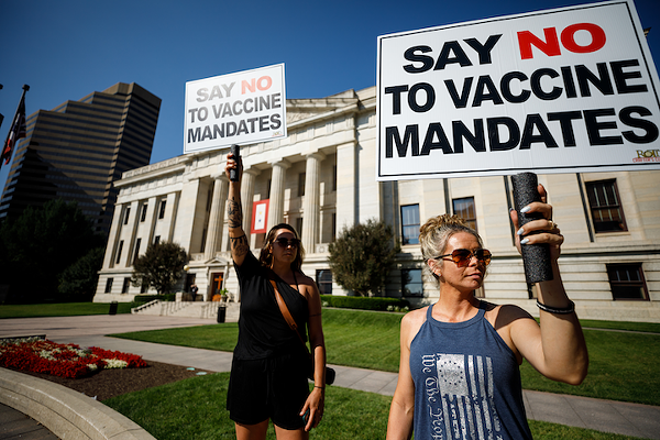 (Graham Stokes/OCJ)
Several nurses indicated Aug. 24 at a rally against vaccine mandates outside the Statehouse that they’d sooner quit than seek vaccination against COVID-19.

The Republican Speaker of the Ohio House, under mounting pressure from the nascent anti-vaccination movement within the GOP, said his caucus is soon to unveil consensus legislation to ban vaccine mandates.

Speaker Bob Cupp, R-Lima, said to reporters Wednesday that House leadership is in the “final stages” of putting together a bill to erect legal protections for Ohioans who refuse vaccination.

“There is a lot of strong interest from people all across Ohio to develop a path that protects individuals’ medical freedom but also protects the safety of Ohio,” he said.

People who are vaccinated against COVID-19 are five times less likely to become infected and 10 times less likely to die or require hospitalization due to the disease, according to CDC data released last week. State hospitals are filled with the most COVID-19 patients, who are overwhelmingly unvaccinated, since January. Some hospitals in southern and southeastern Ohio are approaching COVID-19 patient levels not seen since their peaks in December, when vaccines weren’t available.

Ohio has the 10th lowest rate of vaccination by state, with only 65% of adults having received their first dose.

Global vaccination campaigns have successfully eradicated smallpox from the face of the Earth and could soon do so for polio. When asked why the caucus is so focused on protecting the legal rights of unvaccinated people instead of making efforts to increase the vaccination rate, Cupp noted that he is vaccinated and intends to receive a booster shot.

“Maybe you can help me understand why so many people do not believe that taking a vaccine is something they want to do,” he said. “We’re just responding to the Ohioans we hear speaking to us.”

It’s unclear what any final product might look like. House Bill 248 called for a ban on a wide reach of mandates — including from health care providers like hospitals and nursing homes, colleges, employers, and businesses unto their customers — relating to all vaccinations, not just COVID-19.

The bill stalled, despite receiving six committee hearings, more than any other piece of legislation this session except for decennial redistricting and passage of the state’s $74 billion budget.

It’s one of at least seven separate bills introduced by Republicans aimed at either stopping vaccine mandates or quashing vaccine incentive programs.

Some proposals would allow hospitals and other medically sensitive sites to mandate vaccination, while others do not; some only focus on government offices or colleges.

One of those bills, which ban colleges from mandating vaccines that are only approved on an emergency use basis from federal regulators, passed through the statehouse on a party line vote and signed into law by Republican Gov. Mike DeWine. However, the bill effectively became moot when Pfizer’s vaccine won full approval from the U.S. Food and Drug Administration.