Attorneys May Sue AT&T Over 'Digital Redlining' in Cleveland, Other Major Cities: UPDATE

Florida-based attorney Daryl Parks sent a letter to AT&T top brass this week, hinting at a possible lawsuit over the company's documented exclusion of poor, mostly black neighborhoods in cities like Cleveland. During the late 2000s and early 2010s, AT&T skipped over neighborhoods like Glenville and Hough as it rolled out its U-Verse technology.

Because state legislators stripped away local telecom regulations over the past decade, AT&T was permitted to cherry-pick its customer bases. The internet was considered a utility in Ohio until 2010.

(Clevelanders will remember Parks and fellow partner Benjamin Crump from their representation of Samaria Rice in the early days of her wrongful death lawsuit against the city of Cleveland.)

The digital redlining is not unique to Cleveland. As the NDIA points out in its reporting — and in data shared with Scene — that AT&T used state laws in Ohio and Michigan to systematically exclude the poorest residential customer bases in cities like Toledo, Detroit and Dayton as well.

Parks' letter has been embedded below. He outlines a series of questions that he says he is studying now, including AT&T's obligations to the FCC and to the state of Ohio, as well as how the company's U-Verse deployment might impact proposed and future telecom mergers.

Parks points out how FCC Chairman Ajit Pai has used the digital redlining report to encourage the establishment of "Gigabit Opportunity Zones" in low-incomes areas in the U.S. (Pai's public statements so far don't support any increase in telecommunications regulation.)

AT&T also offered a statement to Scene: "We don't favor any demographic when it comes to providing any service we offer. The market for internet service has never been more vibrant and competitive, both wireless and wireline. We would like nothing more than to serve every customer in Cleveland that wants our services." 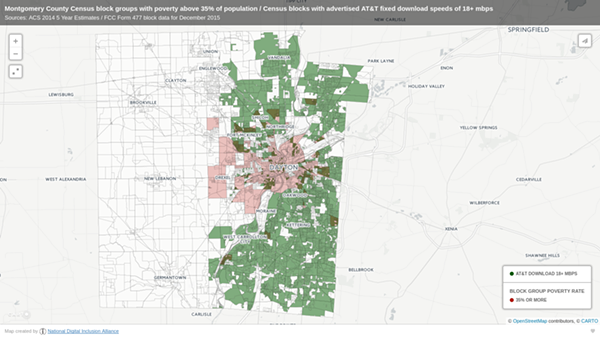 Daryl Parks' letter to AT&T by sandyatscene on Scribd