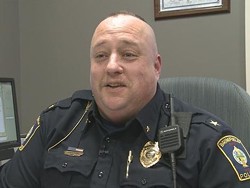 WKYC STILL
You can read the text of the lawsuit brought against Chief David Oliver here (embedded below). The complaint was filed yesterday.

Brimfield officer Crystal Casterline is suing Oliver for sexual harassment, a charge detailed over the course of a two-year period. Casterline cites repeated "unwanted physicaltouching of a sexual nature" amid a "hostile work environment that substantially impaired the conditions" of her employment.

When his suspension was first announced, trustees refused to talk. Oliver himself — along with news reports from around the world — cited a "policy violation," though messages left with trustees Sue Fields and Charles Sprague have gone unanswered.

The Akron Beacon Journal wrested some semblance of information from this thread:


The Beacon Journal has learned that the investigation against Oliver focused on a complaint that a female patrol officer filed. She told an investigator she was subjected to repeated touching and restraining as well as other physical abuse and verbal attacks by Oliver.

While Oliver’s actions were not sexual in nature, the female officer told investigators, she said he bullied her on an almost daily basis. She asked the chief repeatedly not to hug her or restrain her, a request that Oliver ignored for two years, she said.


I am a hugger and a laugher. I have hugged every employee in that building more than once. I usually hug everyone I meet. I believe life is fun. People have stopped into the department from lots of different states for hugs.

When I hugged officers in the department, it was comical. Everyone laughed and carried on about it. It was something funny in the middle of what can be a very stressful job. I never once hugged an employee for “dirty” reasons or as something vulgar. That is just not my speed.

The now-former chief cleaned out his office yesterday. Township trustees will hold a 3:30 p.m. meeting, where they are expected to sign off on this retirement news.