As part of the Q Deal, the Cavs agreed to redo 24 courts around the city 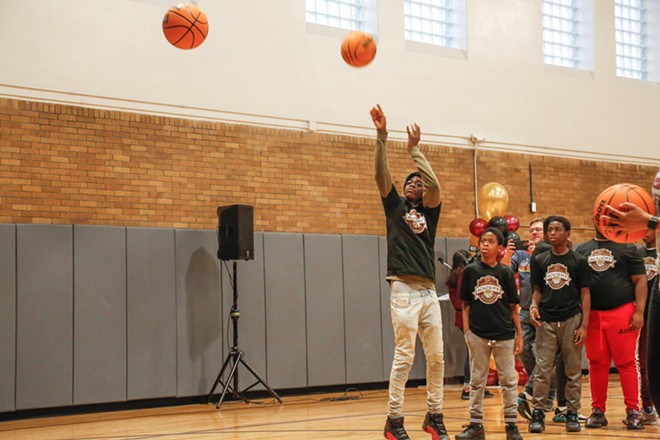 Nearly three years after bids for the job went out, the renovation of the Kovacic Rec Center in Glenville is finally done. The $6.8-million project was paid for by the city with help from the Cleveland Cavaliers, who, as part of the controversial Q Deal, agreed to modernize gyms at 24 rec centers. Depending on the conditions of each gym, the Cavs estimate that it costs between $10,000-$24,000 to redo each floor.

On Monday afternoon, assorted city officials, sports execs and Cavs veterans gathered to highlight both the athletic and metaphorical impact that Kovacic's refresh has for area youth. Flanked by three dozen students, some from the neighboring St Martin de Porres High School, Cavs CEO Nic Barlage said they hope to finish the other half of the courts soon.

"Our goal is, by 2024, [have] every rec center in Cleveland refurbished—and some in Akron, as well," he said.

The Cavs have worked on the city's schedule, and around pandemic closures and restrictions, as rehabs are done to try and avoid work during the school year and other peak periods and to address ones most in dire condition first. 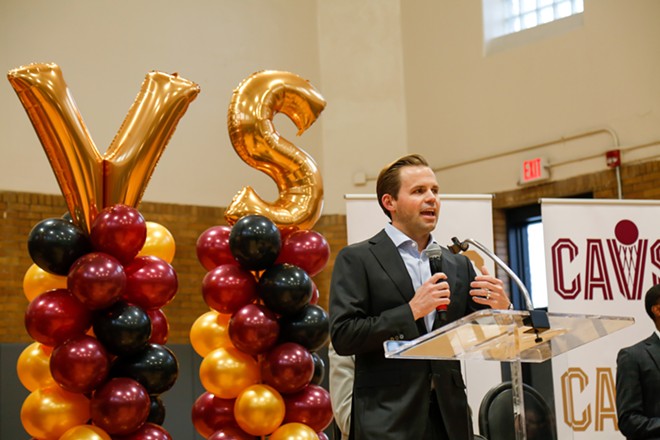 Mark Oprea
Cavs CEO Nic Barlage helps usher in the long-delayed reboot of the city's rec center revitalization plan.
While many gyms simply need new floors, Kovacic, a 100-year-old center plagued by falling plaster and a flooded basement, the makeover was more extensive. The $7-million job, which added a two-story meeting space and an outdoor park, is the building's first makeover in 63 years.

"It was pretty clear that we needed to make the better just... better," Mark Duluk, chief architect of the Mayor's Office of Capital Projects, said. Replacing rundown office space with a gleaming new basketball court, he said, was "addition by subtraction."

"It's giving the building a heart for the first time," he added. 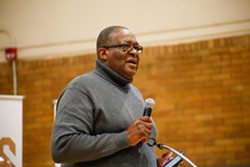 Mark Oprea
Cavs legend Jim Chones speaking at Monday's opening. "This is a place to lay your head," he said. "A place to lick your wounds."
"You know, I swam here, I did arts and crafts here, I spent a long time playing basketball here—these are the [kinds] of places that really helped build me," Howse said. To the parents she added, "Isn't this what our babies deserve?"

The same sense of nostalgia was echoed by Jim Chones, the 73-year-old former Cavs center and radio host.

Chones, who is a regular guest at gym reopenings, read a prewritten address "to all the young people here" in tones leaning on the philosophical.

"This is a grand opening of opportunity," Chones said. "A place to lay your head, a place to lick your wounds. A place to gather your strength."  He added, looking up to the crowd, "We cannot save you, but we can give you the tools to save yourself." 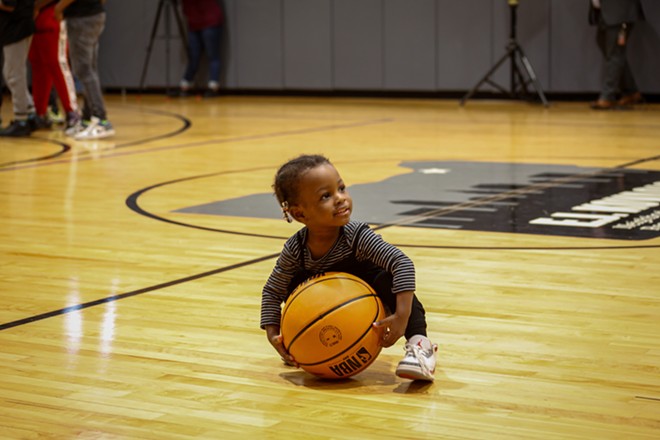 Mark Oprea
Chonte Calloway tests out a ball at Monday's gym opening.
For 33-year-old Donte Calloway, who worked on the project doing maintainance as a subcontractor and who lives nearby with his eight children, the difference is night and day.

Watching four of his kids dribble and enjoy the photo-ops, Calloway said, "Man, you should've seen the abestos! The mold everywhere—God, this place was just..."

He shook his head.