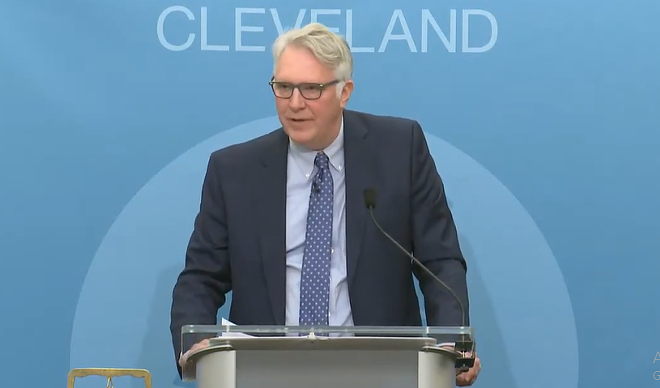 If you thought the idea of a 21st Century Great Lakes Expo died with the political career of former Cuyahoga County Executive Ed FitzGerald, think again. Chris Ronayne, the Democratic frontrunner for County Exec, unveiled his platform Tuesday in a City Club address, and it included a "Freshwater Festival" he said could highlight innovations in water technology and showcase Cleveland's enviable position on the Great Lakes.

"We have a claim as the Freshwater Capital," he said. "Let's leverage our lake for everything from cleaner energy advances to water dependent industry to shipping and recreation. Let's bring a freshwater institute to our shores... We can have fun with this."

The water economy was only one pillar of Ronayne's platform, which he has dubbed "Healthy Cuyahoga." It is aimed at improving the health of the population and the local economy and, in doing so, restoring confidence in local government.

The vision he articulated was supposed to be all about "thinking big." In fact, he said not thinking big was "the only thing that has ever held [the region] back." But beyond the imaginative freshwater stuff, his ideas were largely common sense enhancements to create a county government that would be "smart, communicative and data informed."

In the arena of economic development, he said success would be less about "landing the lion" (like an Amazon HQ2), and more about "meeting existing employers and employees where they're at," making connections, opening doors, being flexible.

Ronayne discussed at length his record of collaboration and innovation in the public, private and nonprofit sectors. And he spoke directly to county employees, promising that he would be a leader who lifted them up, not tore them down.

"It's never 'I'. It's always 'we'," he said. "I say to the workforce of Cuyahoga County, we can do this. We can leverage Cuyahoga County's true potential and better future... In the next county government, the sum of the parts will no longer be greater than the whole."

Though he never mentioned his name, Ronayne's rhetoric and mien presented as the antidote to Armond Budish. Here was a candidate every bit as charming and gracious as Budish is weird and vindictive. Ronayne was speaking to a packed house of people, every one of whom he seemed to know on a first-name basis, and he peppered his remarks with off-the-cuff anecdotes and gratitude to individuals with whom he's worked in the past. Restoring faith in county government, his whole vibe asserted (and the crowd's warm reception corroborated), was first about restoring faith in the person in charge.

During the Q&A, Ronayne emphasized his commitment to criminal justice reform and said that, if given the chance, he would present all the information about a new county jail to the public. (Like us, Ronayne said he didn't have enough information on the process.) He said he was in support of repurposing the Global Center for Health Innovation as an extension of the Huntington Convention Center and that the facility was a public asset, especially as the hospitality industry was among the top five industries in the county. "I will do everything but sell that building in a fire sale," he said.

The Republican in the county executive race, Lee Weingart, announced his political platform months ago, and has noted repeatedly that the other candidates in the race hadn't bothered to formally identify the issues or themes on which they were running. Ronayne now has plenty of ammunition to defend himself against that charge.

After the spectacular failure of the Bill Mason wing of the Cuyahoga County Democratic party to manufacture a challenger, Ronayne was always the runaway favorite to succeed Budish. And even though Weingart has been raising money for more than a year, after Tuesday it's difficult to envision an outcome where the former University Circle Inc. CEO and youth hockey coach isn't the victor in November.