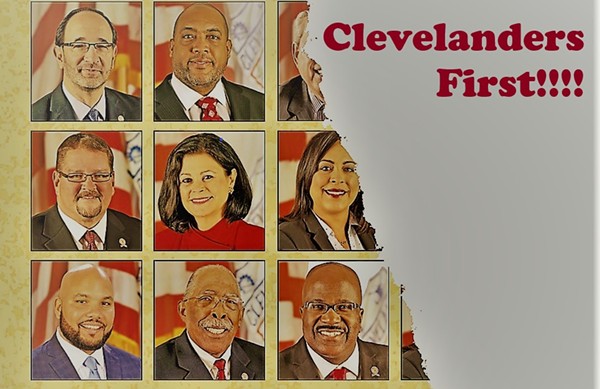 Steve Miluch / Scene
In a truly annoying, trollish move, Cleveland City Council President Kevin Kelley and his assistant Steven Rys have claimed the names "Clevelanders First" and "Clevelanders 1st" with the Ohio Secretary of State and filed paperwork with the Cuyahoga County Board of Elections to create political action committees with those names.

The result is that the opposing campaigns on upcoming ballot measures to reduce the size and pay of Cleveland City Council will be calling themselves the same thing. (Or, in the scenario that Kelley and Rys seem to be gunning for, the campaign against council reduction will now have exclusive rights to the name that had been used by the campaign in favor of it.)

The most generous interpretation of the above is that Kelley and Rys are savvy political operators who exploited an oversight. They swooped in and reserved the names to complicate their opponents' fundraising (to the extent any exists, beyond Tony George's personal checkbook) and obstruct them legally. Kelley told ideastream's Nick Castele that he might send the George-funded Clevelanders First group a cease and desist letter over what is now an illegal use of the name. Rys told Scene that "every dollar" the George-funded Clevelanders First group claims to have spent after its hold on the name expired in November "is a lie" and should be considered election falsification, a fifth-degree felony.

Kelley and Rys no doubt believe — and maybe others do, too — that in a political dogfight against a rich, bad-faith actor like Tony George, any means to reduce his influence and chances of victory should be pursued. But those means now include duping the electorate.

The strategy is likely to backfire for more reasons than one. Right now, council members should be urgently concerned with communicating their value and trustworthiness to constituents, to "prove that they are not the things that are being attributed to them." They scored some fleeting positive press early this week when they passed legislation to do away with penalties for low-level marijuana possession. That's great, and happens to be in line with every other major Ohio city.

But the good will that that legislation may have generated was overtaken immediately by news that Councilwoman Dona Brady would be vacating her seat and appointing a lawyer who lived in Lakewood until very recently as her replacement. Council members' penchant for selecting their own heirs, mid-term, has been decried by the Plain Dealer / cleveland.com, Scene, and residents, and yet the practice persists! It has happened twice since the November elections!

You'd think, in the face of a mounting existential threat, council would at least temporarily stop doing a few of the things their constituents hate.

Take this Kelley and Rys maneuver. However they justify it, they look like dickish teenagers opportunistically hoarding internet domain names. (Cuyahoga County BOE confirmed that the "Clevelanders First/1st" PAC creation was "just like that, yeah," when we made the comparison.) And they reveal themselves to be the same characters who have reveled in subverting other forms of democratic action: by erroneously claiming a citizen-led referendum drive was invalid because it would violate the U.S. Constitution, for example, or by refusing to certify petitions because they lacked properly worded election falsification warnings.

Just imagine — imagine! — if Kelley and Rys had claimed the names "CLASH" and "Cleveland Lead Advocates for Safe Housing" early last year to thwart the efforts of the coalition pushing for solutions to childhood lead poisoning. The shittiness could not have been overstated. (Here, the George-backed Clevelanders First group is much less public-spirited. But the effect of the Kelley-Rys maneuver is nevertheless to create sympathy for that group's members. “It’s a political move to confuse the voters,” one of the group's leaders told ideastream.)

It sure seems that way! Especially because Kelley and Rys don't appear to have stolen the names as a tactical "Eff you," to George. They're not simply squatting on the name, in other words. They actually intend to co-opt it, to call themselves "Clevelanders First." If the PAC gets money, (from the County Democratic Party, say, where Kelley is co-chair), its name will be disclosed on the literature which will do doubt be in wide circulation soon.

It should go without saying that that's extremely confusing. Since 2018, the group in favor of council reduction has been called "Clevelanders First." Now the council-led group against reduction will be calling itself the same thing? Can there be any realistic explanation other than that this is a deliberate effort to sow confusion among voters?

The impression is one of desperation. Council leadership must suspect that it can't win the measure by legitimate means. And so, at a moment when council should be trying to demonstrate its value and trustworthiness to constituents, the strategy is to trick them.