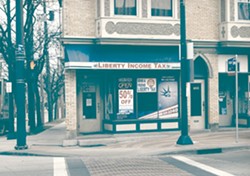 Spearheaded by Councilman Anthony Brancatelli, the new regulations mandate that storefront tax preparers like Liberty Tax Service, H&R Block and Jackson-Hewitt disclose all of their fees upfront and must be certified by the city's department of licenses and assessments. Preparers will also be prohibited from requiring consumers to utilize "refund settlement products," mechanisms where portion of tax refunds are advanced to consumers against the anticipated value of their refunds.

Additionally, the new ordinances feature a requirement that the Manager of Fair Housing and Consumer Affairs produce a "Consumer Bill of Rights" with basic information about tax preparation and refund anticipation products. Tax preparers will be required to provide consumers with a copy of the Consumer Bill of Rights.

"It's very comprehensive," said Councilman Anthony Brancatelli, in a conversation with Scene Wednesday. "I consider this a Christmas present to our residents, and a little coal in the stocking of those preparers who haven't been regulating themselves enough."

Brancatelli, working with Neighborhood Housing Services of Greater Cleveland, advocated for thorough legislation modeled after other cities with similar regulatory structures. The consumer bill of rights and the mandatory disclosures in Cleveland's version are similar to those in Chicago. The registration and training piece comes courtesy of Maryland, Brancatelli said. The Slavic Village councilman credited David Rothstein at NHS and City Council attorney Jennifer O'Leary for their diligent work.

Though he hasn't followed up with Council President Kevin Kelley, Brancatelli said he's hopeful that the legislation will take effect this coming tax season. The legislation was introduced Monday and referred to committee.

"That was the goal," Brancatelli said. (He'd been pursuing the legislation when we spoke with him this spring as part of our in-depth piece on the Storefront Tax Preparer industry.)

"We don't want to do any harm to the folks who are doing good — the volunteers and the CPAs," he said. "We just want to hold the feet to the fire of the companies picking people off the street and calling them tax preparers. We're getting more folks aware. If we do a full-court press now, this can go into effect very quickly."

Correction: This story has been updated to clarify that the legislation has been introduced but not yet passed.