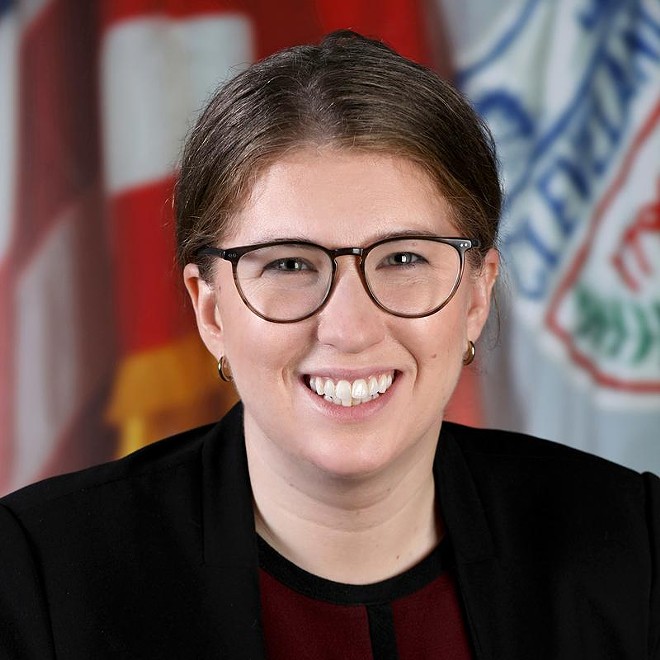 When Ward 12 Cleveland City Councilperson Rebecca Maurer arrived at City Hall in January to begin her first term, she hadn't thought much about constituent services. She understood that councilpeople were often residents' first call when they wanted to complain about broken streetlights, potholes or noisy neighbors. But she envisioned this direct service work as only one component of the job. Equally important, she thought, should be shepherding ward development projects and working on citywide policy and legislation.

Six months into the gig, Maurer now understands the enormous burden of responding to daily phone calls and emails from constituents. The ceaseless work of putting out fires means that a councilperson rarely has time to take meetings about ward projects or to research and draft legislation. According to Maurer,  it doesn't have to be this way.

Maurer and her staff released a report Wednesday morning that analyzed constituent calls they've received over the past six months. The report illustrates how a city councilperson spends their day and proposes straightforward changes at City Hall that could, Maurer said, make life easier for City Council and city workers while also providing services to residents more effectively.

The fact that only months into her four-year term, Maurer is not only identifying systemic problems, but also explaining to residents why they exist and how they might be solved, is the most radical departure from the city council status quo we've seen in years. (The report is an example of what actual transparency and proactive leadership look like.)

Maurer's office has already received 1,000 calls for service in 2022, the report said, averaging about nine per day. Some of these are handled almost instantly, redirecting a caller to a more appropriate city department. Others can drag on for months, like the case of lamppost replacement referenced in the report, which Maurer said required 26 emails and communication with six different city offices.  (One imagines a restaurant's kitchen with a nonstop flow of orders, dishes being assembled on the fly, all while key ingredients are running low and most of the staff has called in sick.) The report said Maurer's office usually had 100 "open tickets" at any given time.

By comparison, the city's 311 line has received only 5.5 calls per day from Ward 12 over the same time span.  Analyzing the call data, Maurer found that more than 90% of the calls to her office were related to issues that did not require direct council involvement.

“While we are happy to hear from our residents, these calls put a huge strain on the small staff at council offices," Maurer said in a press release announcing the report. "Ultimately, managing this high of a volume limits our ability to serve residents better. We need to look at systemic changes that can modernize and improve City Hall and provide a better experience for residents.”

The report, included in full below,  dovetails with Mayor Justin Bibb's rhetoric about modernizing City Hall. And its suggestions for systemic changes, largely related to communication and resource allocation, are made in the context of specific cases.

The report notes that thousands of Cleveland residents are on a waiting list to receive new plastic garbage bins from the city,  a backlog recently exacerbated by supply chain issues. For years, Cleveland council members have encouraged residents to reach out to them directly about broken  bins in need of replacement. Council members then email Waste Management administrators on their constituents' behalf. This is a grossly inefficient system, Maurer argues.

On the communications front, Maurer suggests that the city send a mailer to all residents currently waiting for new bins explaining the delay and encouraging them to call 311 in the future for new bins. Council members, too, should refer bin replacement requests to 311 and only provide "ombudsman services" after lengthy delays. These improvements should be made in tandem with improved resource allocation, Maurer suggested. Council should be in communication with Public Works to ensure regular bin appropriations so that the department always has a sufficient supply on hand.

"Beginning to move some basic city services off of Council's plate will begin to improve the balance of time within Council offices and will have positive effects for Council, the Administration, and residents," the report concludes.

Accomplishing this is not rocket science. The report prescribes a coordinated campaign to promote the 311 line and the sorts of specific services residents can call about. And it recommends starting small, tackling "a handful of high volume constituent issues where we can make an impact in the next 12 months."

A number of Maurer's colleagues on city council quickly corroborated the report's findings Wednesday morning, based on their own experiences. Council President Blaine Griffin, however, told Cleveland.com that he saw value in council members providing these services to residents, and that residents often call their councilperson because they trust them. He said individual council members should be allowed to approach constituent services how they see fit.

Council people are indeed an important conduit to City Hall for many residents, but Maurer is correct that she and her colleagues spend far too much time on constituent calls, an imbalance which has lead directly, in recent years, to rubber stamp legislation and painstakingly slow progress on popular reforms. What's also no doubt true is that some elected legislators prefer it that way.

We wrote last year that a fetish for constituent service, as exemplified by former City Council President Marty Sweeney, benefits Cleveland lawmakers "because they can keep winning elections by cutting grass instead of crafting policies that support the wellbeing of residents citywide." It also benefits local corporations and real estate interests, we noted, "because they can craft policies that support their clients' wellbeing, knowing that council members are far too busy with constituent phone calls to think critically about their votes."