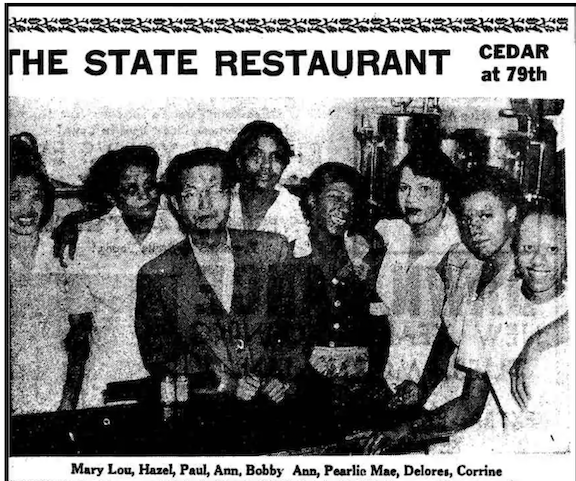 Mark Souther, the Cleveland State University professor and historian who you might know from his essential book "Believing in Cleveland," recently launched a new project aimed at exploring and adding to the historical record of Black life in Cleveland from the 1930s to 1960s.

Green Book Cleveland, a map-based historical site filled with hundreds of entries, includes the bars, restaurants, bowling alleys, barber shops, clubs, theaters and other entertainment spots that were included in one of the Green Books, published for 30 years during the Jim Crow era as guides to where African-Americans could enjoy courteous service and a safe, friendly environment in their travels.

But the project goes further, adding places that weren't included in the guides, and parks and natural spots where African-Americans enjoyed recreation during those decades. "These are mostly stories of small business owners and the clienteles they served, but they extend to stories of struggles simply to enjoy fresh air and cool water," the site reads.

Scene spoke with Souther about the project and how the public can help.

The conversation has been lightly edited for length and clarity.

Scene: Where did the idea to do this come from?

Mark Souther: The idea is something I've thought about in various forms over the period of years. It comes out of several areas of my work as an historian. One: I spent a number of years earlier in my career looking at urban tourism, including in New Orleans. When Green Book Guides for Black travelers began to get new attention, I wanted to know more, as someone who was interested in tourism.

Second, for the past 15 years I've been working with students and community organizations on space-based story platforms. I've been doing that for eleven years with Cleveland Historical. The Cleveland Green Book project is a more thematically focused extension — the idea of using a map-based website to shine new light on places whose histories aren't that well understood, and in some cases hidden or forgotten.

And third, there's a piece of it that goes beyond documenting the sites that appeared in the Green Book Guides. I was interested in going beyond that and going to leisure and entertainment beyond the city itself, places that didn't make it in the Green Book, places that African-Americans went for leisure activities. That kind of squares with researching and teaching in more of a metropolitan focus rather than the city and its near cities: How do we think about a metro region?

I wanted to better understand and explore how African-Americans struggled to gain access to suburban landscapes and housing, but more about not just the struggle for homes but how do you maintain and gain access to nature? How do you find access to parks? We're talking about the 1930s through the 1960s, primarily up to the period of what we think of as the Civil Rights movement proper. So it predates that period by decades. I'm interested in how African-Americans navigated "unwritten rules", how you found places where you could go without difficulties. There weren't laws, but there were customs and unwritten policies and individuals who took it upon themselves to enforce a color line. How did these things prompt Blacks to either struggle against that or push back and carve out separate places where they wouldn't have to deal with those problems?

Scene: The inclusion on the site of parks, beaches and other natural places was immediately interesting, and included a bunch of places that either don't exist anymore or have different histories than most might know.

MS: Edgewater, for instance, was generally not a welcoming place. It's included on there because we found evidence Black groups occassionally did, in earlier years, gather there, but it was not a choice place. Euclid Beach, if you look at the story on that, there's the well-known 1946 Euclid Beach park riot, and there had been efforts to exclude Blacks as a whole from certain parts of the park going back to the early 20th century. It was not a friendly and welcoming place, but we chose to include it because it helps tell the story of the struggle to overcome exclusion.

On-Erie Beach, on the other hand, was a place that was carved out aas a separate place, and actually envisioned by a Kentucky woman who had migrated up to Oberlin. She envisioned it as what she called a Black utopia, a leisure resort for African-Americans. It would cross regions. It would invite speakers, like Chautauqua. It would have a religious component, but it was mainly recreational. It would have a cottage community and a beach. Access to water and beaches has historically been one of the most fraught aspects of racial struggle in the country. You think about 1919 in Chicago and it's a public beach where there's an incident that leads to the so-called race riot because Blacks were swimming and drifted into an area that was ostensibly a white beach. We think of the North and the Midwest as a place that was more open and tolerant and enlightened than the Jim Crow South, but it still wasn't all that way. On-Erie Beach, it was in Lorain. I would call it Northeast Ohio's version of the Black beaches you may read about, like American Beach near Jacksonville. It's sort of an analog to the lake resort at Idlewild in Michigan. Not the same scale, not nationally know, but the intent was similar.

Scene: How much of what is on the site now appeared in the Green Books at some time and how many are additions by you and your students?

MS: There are about 240 sites right now. Of those, about 100 were in the Green Book, either in Cleveland or Lorain or Akron, and a few other cities. The other 140 were never in the Green Book, but the Green Book is very idiosyncratic. Some places that were very, very popular in the Black community in Cleveland for many years may only appear in one or two years of the Green Book, for reasons I don't necessarily understand. Some places come and go, some places stayed for 30 years, some places were only in there for one year, but you can read about them in the Call & Post and find lots of evidence they were very popular and attracted not only locals but people from other cities and even celebrities. Being included or not is not the end all be all defition of whether places were important. Those are selective snapshots. I want people to use the website not as a static guide but as an exploratino of a broader history in which there's change over time. The 1930s and the 1960s were very different times. There are places that their stories span all 30 years and some that are more focused on the late 1950s or early 1930s.

Scene: How can the public get involved to flesh out the research? There are probably lots of places or at least lots of information that never made it into news articles.

MS: It's really important and critical going forward that this becomes something that goes out into the community.

Scene: Midtown had a great documentary recently on the history of Leo's Casino, and while there weren't interviews with any famous musicians about their memories of the venue, there were tons from people who lived in Cleveland and went there as teenages, or on dates, or over the years. Hearing from them directly about their experience of the place was so valuable to add to the story most people might get reading about Leo's.

MS: That's precisely what needs to happen here. I would like people who find out about this project to reach out. I hope that people will share stories, if they have them, from their family or themselves, that give a feeling for the lived experience rather than basic facts. I'm interested in oral history interviews, and would like to get people recorded so that stories can be preserved and added to the project. I could also see the project being used in schools. Place-based history is an incredible way to learn social studies — using local examples to learn about national events or trends of importance.

Scene: Is there other ways the project can come alive outside of the virtual component?

Scene: A lot of work.

MS: It's a student project, and they deserve so much credit. They're learning, maybe for the first time, about putting together a narrative based on what sources suggest and seeing the gaps. It humbles you. You realize how little made its way into print. If we're talking about the West Side Market or Lke View or the Terminal Tower, you have reams of photos and stories.

Scene: And not so much with these restaurants and clubs and parks, whereas you could find the week-to-week history of every white country club over the last century.

MS: There were Black country clubs, not always about golf, but they had clubhouses, they had hunting and fishing. Those places are not well-documented.

Scene: Someone might be vaguely familiar with Mason's farm, for instance, but it's not like it was a fixture in historical records?

MS: Mason's is a really interesting story. In the piece, there's one level where Bennie Mason is thought of as a racketeer, but on the other hand, it's really interesting because while he's implicated in these activities he's also well-known in the Black community as a philanthropist who gave generously. How one gets their money is one thing to look at, but you also look at what you do with that money.

For more information and to explore for yourself, visit Green Book Cleveland.