Comedy is Hard, But Neil Simon and the Beck Center Cast Make it Look Easy in 'Broadway Bound' 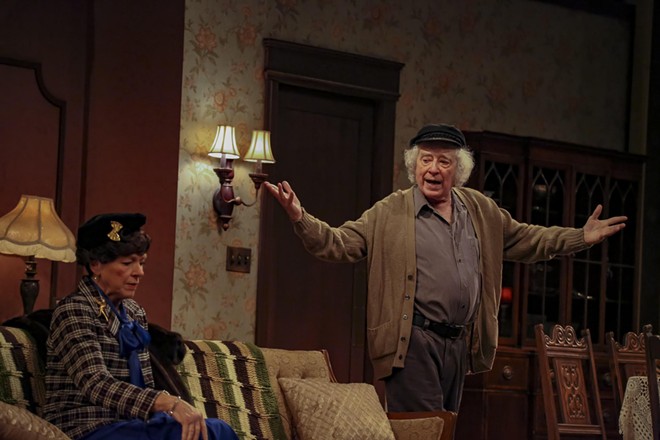 Steve Wagner Photography
Broadway Bound
Neil Simon is often dismissed these days as a jokester, not as a serious playwright. And that description is true up to a point. As a member of the writing team that created Your Show of Shows, a TV comedy juggernaut featuring Sid Caesar in the 1950s, Simon could punch out punch lines with the best of them.

But his humor was always based in pain—especially the pain created in dysfunctional relationships—and that is displayed in Broadway Bound, now at the Beck Center for the Arts. This is the capstone of Simon's trilogy of plays that explored his growing-up, post-War years in the New York neighborhood of Washington Heights. This intensely family-centered play takes place in his home, rendered with warm detail by scenic designer Cheri DeVol.

That's where Eugene (based on the playwright) and his older brother Stanley (a stand-in for Simon's brother Danny) trade bon mots and snappy comebacks with their parents Jack and Kate—along with Kate's dad, the irascible socialist Ben. The boys are intent on leveraging their comical chops, developed over many years as a defense to fend off or escape their parents' ongoing squabbles, to become comedy writers for radio shows.

A master at turning everyday domestic conflicts into hilariously funny one-liners, Simon mines his own family's sturm und drang as he did in the first two plays of this trilogy, Brighton Beach Memoirs and Biloxi Blues. And in this concluding piece, he doesn't shy away from confronting various familial agonies including the unintentionally amusing Ben, who has difficulty showing love, and Jack's dalliances when he's not cutting fabric for women's raincoats at a garment factory.

Under the deft direction of William Roudebush, the Beck cast delivers this material successfully even though the pacing, especially in the first act, feels a bit uncertain at times. As the primary character who also speaks directly to the audience, Zach Palumbo's Eugene is a rapid-fire joke machine, responding to virtually any situation with a killer line. But he also feels deeply for his family, and Palumbo brings out both those aspects. Daniel Telford is also excellent as Stanley, a "nervous Nellie" as they used to say, who is always worried about everything and shares his distress in an amusing stream of asides to himself and others.

Their scenes together as they deal with the torment of coming up with comedy ideas so they can impress the honchos at CBS have the snap and sizzle that the playwright intended. When Eugene says, "I love being a writer, it's just the writing that's hard," he speaks for everyone who has ever taken up the quill.

And that's the magic that Simon can create when he's at his best. Sure, there are moments when he tells too much, such as when one character says, "I am so hurt" or another notes, "I can see the disappointment in your eyes." While it would be better to leave those realizations for the audience to find on their own, very few playwrights can combine humor and poignancy as well as Simon.

Consider the extended scene when Eugene coaxes his mom into describing the day she danced with the famous actor George Raft. As Kate, Susan Stein never succumbs to the temptation to push her monologue too far, and the result is a tender, evocative memory that culminates in a dance with her son. It is a lovely moment.

Equally good is Alan Safier as Jack, an unlikable character who disappoints both his wife and his children. Simon refrains from using his sublime comedic skills to paint a pretty face on Jack's behavior, including his negative (but honest) reaction to the boys' first radio skit that seems more autobiographical than imaginary.

In the role of Ben, the well-known actor Austin Pendleton—who has a film career spanning a gasp inducing seven decades—knows his way around a gag line. And even though Pendleton may be a half-beat off in his timing now and then, he finds both the grit of this old man and his soft center. In the largely thankless role of Kate's sister Blanche, who makes a brief appearance early on, Anne McEvoy delivers her usual professional performance.

Even with its wrinkles, Broadway Bound is a great example of Neil Simon's writing genius. And this production at the Beck Center is up to the task, snatching up all the chuckles and the tears.