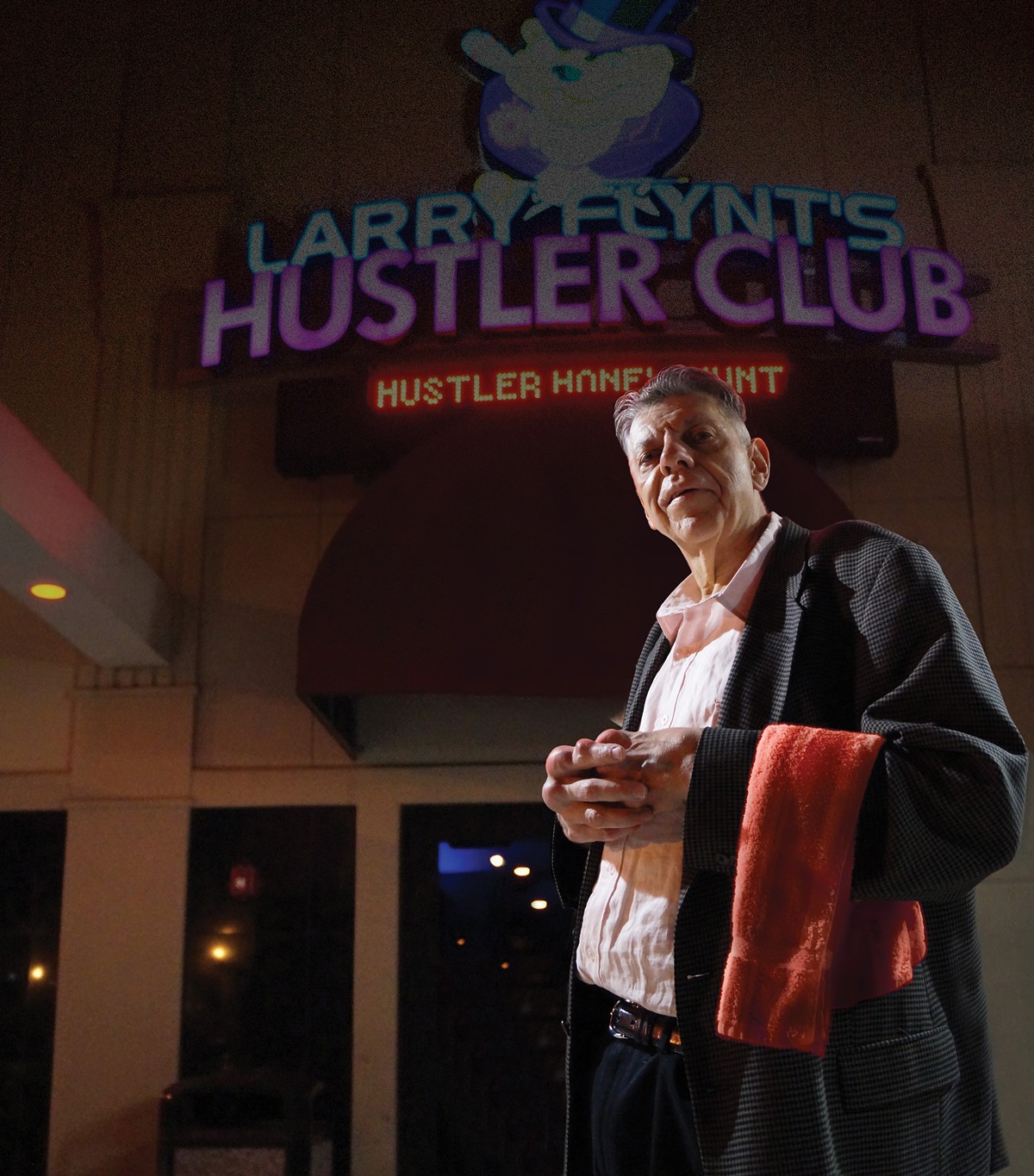 The bathroom counter at Larry Flynt's Hustler Club in The Flats looks like a small colonized offshoot of CVS.

They're lined up like a miniature city against the mirror, their irregular lids and caps assuming the distinct personality of a skyline.

Door George wipes down the black granite surface between the four bone-white sink bowls, hobbling perpetually fore and aft on medical boots and toeless feet, his reflection rising above his products like a hobbyist architect's. He's the lone sentinel and shark of this strip club washroom and damned if he isn't pouring himself a cold one.

He's got a bucket of beer stashed on ice beneath the sink deck, Busch heavies, bobbing like apples down there. It's only 10:14 p.m. on this Friday in April, but he's already had a few. Door George owns this bathroom, after all. He does as he pleases.

"Thank you sir," he nods at a guy pressing a single into the ice bucket full of bills on the counter next to the cigarettes while another guy pats his chest and then his butt, searching for his wallet even as he disengages from a urinal. But George waves him off, tells him he's already been very kind tonight.

"George, you're top of the line," the guy says. He finds a billfold and tosses a single on top of the others. George smiles and dispenses soap into a third party's waiting hands, the maestro multitasking with ease.

Door George is a taller guy in his sixties, "once-striking" more than "once-handsome." As he talks with his customers, he's got the big friendly face and graying hair of Eastern European uncles. But the most notable thing about his appearance are his injuries. His hands are gnarled by arthritis, his legs bloated by veins that won't circulate.

"What are you doing?" demands a woman who has materialized near the breath mints. Except her interest is purely conversational because now she's focused on her makeup and the adjustment of her wee and insubstantial bra, and then the location of a cigarette with the appropriate filter and brand.

Door George greets her as "Honey," like he greets all the strippers who saunter back here to converse or convene or—in a manner of speaking—convalesce, and tells her he's being profiled.

He was the doorman at The Circus—Caesar's Circus, before Vegas politely asked them to cut their name in half—for 25 years before owner Tim Spencer sold the joint to Larry Flynt's, the national chain, in an act of defiance against the Wolsteins and their monopolistic glitz, in 2005.

Door George was the gatekeeper. He was the man who made the rules and held the cards. He wore a tuxedo to work. His business card was printed on parchment.

And you bet your ass he's got one left over from the Circus heyday here in the bathroom—he keeps almost as much memorabilia and paraphernalia from his personal past as he does accessories for his customers' present. There's a photo of George in uniform above the sink that looks like something out of M*A*S*H. There are albums and placards and decades-old advertisements in frames around his makeshift office. And there is this business card:

"I used to answer the phones, and that's how I said it," says Door George, trundling about his apartment on E. 185th St. "Just like that: Cleveland's Verrrry Finest Show Bar."

The tagline is a recurring and inescapable apparition, even in George's domestic sphere: Here it is on a poster above the image of a woman in sultry chiaroscuro in George's bedroom; and there again embossed on a windowsill ashtray; appended to advertisements for food specials and event invitations festooned upon George's walls and chairs like evidence at a crime scene.

Door George doesn't get back here until late. He works the Hustler Club bathroom until 3 a.m., takes a taxi back to Collinwood and falls asleep by five. He doesn't wake up until after 12.

It's 12:30 now and George hasn't dressed. His feet, erumpent with gauze, pad from his kitchen to his bedroom and back again, in addled pursuit of who knows what. He's already had a pot of coffee and now he's onto beer.

He talks in an insistent baritone, but his mouth is often far ahead or far behind his brain. Things dawn on him mid-sentence or twenty minutes after the fact. It's because his mind is a reservoir of endless stories, and lately, a reservoir of crack cocaine. He's spent 65 years compiling an iconic life anthology, and 12 dismantling it (or complicating it), hooked on heavy drugs.