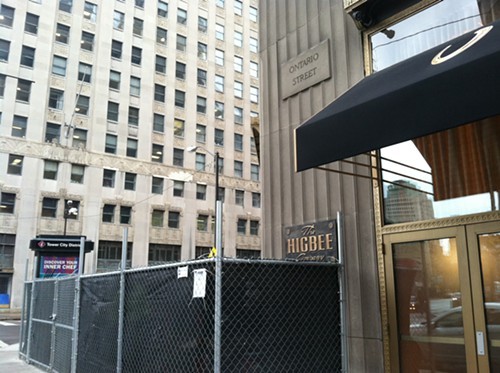 Opaque fencing has swallowed the Prospect Avenue corner of Horseshoe Casino, meaning only one thing: That goofy skywalk is coming.

Thanks to the exclusively-minded planning of folks like Dan Gilbert, Mayor Frank Jackson and Ward 3 City Councilman Joe Cimperman (repping downtown, Ohio City, Tremont, et al.), the skywalk will connect what city leaders champion as the savior of downtown economic development (gambling!) with the parking garage located across the street. It also completes the cycle that began when Rock Gaming totally altered its original development plans and knocked down the Columbia Building to erect that very parking garage.

From a June 26 Scene article:

On the surface, the whole skywalk thing is kinda innocuous. But greased by city stakeholders and championed by those precious few, it's yet another step in a corporate catering direction. Really, the crowd using Horseshoe's valets and the casino's impending skywalk are a fringe and suburban bunch. But the red carpet almost makes it seem like this is Cleveland's most prized demographic.

Now that the job is on the clock and under way, the city's all-in bet on casino revenue (which has been shaky at best since opening) and the glamor of 20th-century civic development is on full display. At its heart, though, this skywalk business can be chalked up to a vast disparity between city leaders' overzealous use of the rubber stamp and the vocalized desires of downtown residents (at the very least a willful minority, though dissenting chatter online and IRL seems fairly widespread).

More than 500 people signed a petition to halt the project. That effort, helmed by Cleveland resident Joe Baur and OurCLE, fell on deaf ears down at City Hall and within the gilded confines of the casino.

The whole thing - all $5.6 million of it - is slated to be completed by Jan. 1, according to General Manager Marcus Glover.