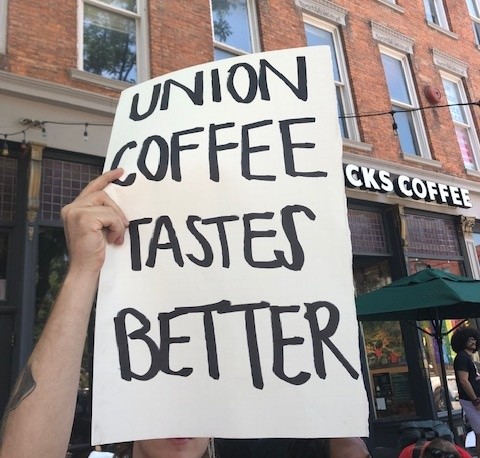 The election was changed from in-person to a mail-in vote due to rising Covid numbers in recent weeks, an employee told Scene. The results were tabulated Thursday, and the decisive victory for the Westlake store was confirmed.

The employee said that overall feelings in the aftermath of the vote were of both "relief and excitement for what's to come." They said workers are eager to meet with national committee members to iron out what they intend to seek at the negotiating table. And though Starbucks has been resistant to negotiate, the employee felt that the mounting pressure of increasing numbers of stores unionizing would eventually force corporate's hand.

"They either come to the table or we threaten to strike," they said.

Baristas had told Scene in August that they began seriously talking about forming a union after they were forced to watch a video from Starbucks CEO Howard Schultz. In it, Schultz portrayed the Starbucks unionization efforts nationwide as the work of outside forces antagonistic to the company's culture.

Workers at Crocker, as at other locations, were dealing with high staff turnover and disrespect from management. A major factor was scheduling. Workers were routinely scheduled for hours just under the threshold at which they would be eligible for benefits.

They declared their intend to unionize with the National Labor Relations Board on July 18.