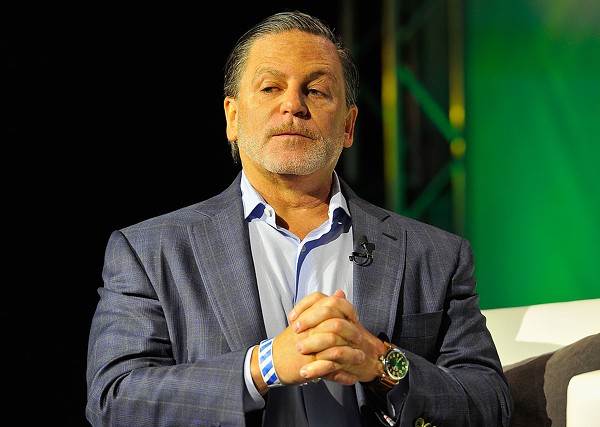 Wikipedia
The New York Times took a look at Quicken Loans over the weekend in a semi-lengthy article. The hook here is that the Department of Justice's suit against the mortgage company will be heard this year (in Detroit) and in the wake of the recession, Quicken has emerged as the nation's "second-largest retail mortgage lender, originating $96 billion in mortgages last year — an eightfold increase from 2008."

It wasn't an entirely rosy outlook. As a reader, you might be able to guess, based on Gilbert's social media presence and previous record of letter writing, his reaction to criticism. Reporters, whether they cover the Cavs or any other part of Gilbert's empire, are more acutely aware of the brand of pushback that comes with unflattering portrayals of his work. In this particular instance, the Times reporter had a unique but still typical interaction.


On a more trifling scale, after sending text messages about this article to a reporter at The New York Times but not receiving a response — Mr. Gilbert was texting her landline number by accident — he followed up with an email accusing the reporter of disconnecting her mobile phone to avoid him. The phone “likely is one of your temporary numbers that you deploy for the surreptitious work that you do,” he wrote.

When alerted to the misunderstanding, Mr. Gilbert apologized “for any of it that was caused on my end.”

When Mr. Gilbert was asked in an email if he “often strikes a ‘combative stance’ or ‘frequently attacks his critics,’” a Quicken Loans spokesman responded in an email, “It’s interesting that when someone with as long and successful career as Mr. Gilbert is forced to defend his integrity and honor from old and/or insignificant already rehashed incidents and accusations from a media source as credible as The NY Times, you would imply that doing such is ‘frequently attacking’ his critics.”

For all the nasty missives fired off by Gilbert over the years that landed in the email inboxes and voicemails of reporters, this begs the question: How many more were blasted into the ether, directed to defunct fax lines? Of course, if we, the media, stopped using burner phones and temporary numbers to do surreptitious work, it wouldn't be a problem.