Do I Dare Disturb The Universe?

From The Projects To Prep School 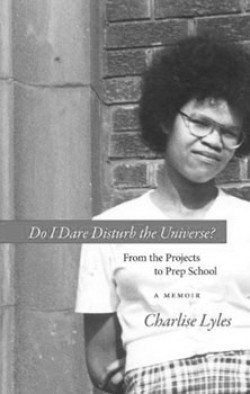 In her memoir Do I Dare Disturb the Universe?, Charlise Lyles describes growing up in Cleveland public housing in the 1960s and 1970s amid stifling poverty but with a burning desire to become an intellectual. Her father sparked that desire by introducing her to great books at an early age - and then he abandoned his family. After receiving a scholarship from the A Better Chance program in the ninth grade, Lyles left the decaying Cleveland public school system to attend Hawken School, a mostly white prep school in affluent Gates Mills. In this excerpt from one of three new chapters in the updated paperback edition of her book, Lyles describes her anxious mixed feelings en route to her first day at Hawken in 1974. The Hawken School bus ran east, straight out of the steel heart of Cleveland. It started near Shaker Square, an unofficial border of race and class in Cleveland, where Buckeye Road became the more aristocratic-sounding South Woodland. Crossing over the bumpy rapid-transit tracks, the bus entered Shaker Heights, one of the nation's wealthiest suburbs. There, oak trees seemed to grow taller, greener, their branches arching high overhead like praying hands.

At 7:30 a.m., Mrs. Moore had promptly deposited me at the bus stop at Lee and South Woodland roads. It was the intersection where several of the few black kids who attended Hawken boarded the bus. Kids like Michael Williams, a fair-skinned boy with a reddish Afro. His family was what my momma called "middle-class," meaning they didn't have to work two or three menial jobs like she did. Middle-class people lived in nice houses, and the fathers lived right there with them. Michael and other black Hawken students were the first I had ever met who lived in Shaker or the Lee-Harvard area. Still, the Hawken bus did not offer them the nearly door-to-door service it provided to wealthier, white children who lived deep in Shaker, Beachwood and Hunting Valley. Getting to the South Woodland stop in time to catch the bus required some of us to rise from our warm beds as much as two hours earlier.

The yellow school bus zoomed toward us across Lee Road and jerked to a stop. The doors popped open like bread out of a toaster, and we climbed aboard.

I sat down on a cold, vinyl bus seat by myself. The morning was sunny and warm, but my hands were clammy and icy, gripping five notebooks I had bought from Kresge's five-and-dime downtown. I felt keenly aware of myself - my skinny body topped with a pair of oversized breasts. Just weeks ago I had been proud of them. Now, they felt awkward and annoying. I pulled the front of my thin, blue windbreaker tightly and zipped it up. My Afro seemed too bushy. Why didn't you braid it and roll it up on curlers the night before?, I scolded myself silently. It would've been curlier, and I would've looked cuter. My thick glasses pressed on my flat nose, tilting slightly to the right. They were octagonal wire frames just like the ones Don Cornelius wore on the Soul Train TV show. I hoped my new Hawken classmates would appreciate just how "bad" they were, the way that my friends at Kennard Junior High School had. ("Oooo Shorty," they'd praised. "You got you some bad glasses. Where you get them from, girl?" "Dr. Frederick's Optical, downtown on Prospect," I'd replied proudly.) Now, they felt crooked on my face, no matter how I poked or prodded. I would've just taken them off, except that would've made the sight of my new Hawken classmates boarding the bus one big blur.

At South Woodland and Drummond Road, Seth Boorman stepped briskly on board, tightly holding a black briefcase. He deposited himself into the seat nearest to me and with a flick of his thumbs snapped open the briefcase's brass fasteners. The lid popped up to reveal a neatly organized cache: a stack of notebooks, pencils, pens, a calculator (I had never seen one before) and a few books, including a dictionary. He lifted one book, stuck his nose in it and began to read. I wondered whether Seth Boorman had read as many books as I had read over the summer.

At Warrensville Center Road, the bus turned north for a block or two, then east again, onto Shaker Boulevard and into Beachwood, a suburb of new ranch homes. Wood and brick with large windows and pitched roofs, they looked like the house where the Brady Bunch lived. I had heard my Aunt Cora, who sometimes pretended to be more worldly than her life in an apartment on Superior Avenue, call Beachwood the home of Cleveland's nouveau riche. "That means new money, honey," she'd say. "They just earned it."

Next stop, Michael Steinman bounced on board, rosy-cheeked and gangly. With a large black leather briefcase in one hand, a calculator fastened to his belt and a watch that seemed inordinately large for his bony wrist, Michael looked like an academic Astro Boy, ready to blast off into new frontiers of achievement and excellence. It was as if the white boys on the Hawken bus were pretending to be like their fathers - grownup lawyers, bankers, businessmen.

Most of the black kids who had boarded the bus with me at Lee Road had taken seats in the rear. They seemed to own the last four rows. Mostly boys with well-trimmed Afros, they seemed no more or less friendly toward me than my new white schoolmates. Some of them already knew each other because they had attended the Hawken Lower School together. Most of them were toting briefcases too. Probably urged on by proud fathers who were custodians or dry-cleaner operators, the Hawken black boys seemed to be rehearsing to fulfill their fathers' unfulfilled dreams of practicing law or running banks.

As bus seats began to fill up, the noise of voices excited about the first day of school began to rise. I didn't dare open my mouth. As more new classmates boarded at stop after stop, the butterflies swirling in my narrow belly began to flutter up a storm.

After each stop, the bus gears groaned and the engine jerked, yanking me forward, farther away from Cleveland, a city where a river can catch fire and burn, a city where ice-cream vendors are murdered in front of a little girl's bedroom window, a city where fathers, filled with shame because they cannot find a job in a steel mill, leave their wives, sons and daughters to fend for themselves.

Finally, the bus turned on to Mayfield Road and began a long uphill climb. The butterfly wings beat faster. Who among these strange, rich, white kids would become my friends? Would those black middle-class kids look down on me, be ashamed of me? Who would understand the world from which I came, a world away from the privilege and prestige of Hawken? Who would accept me as I was, just a girl growing up Afro and American, a girl who had to fend off would-be molesters on her knees in cold puddles of piss in the hallway of a public housing project, a girl who dreamed that someday her jobless father would find work, move back home and read great books with her?

At the top of the hill, the bus turned left onto County Line Road. The aroma of freshly cut grass filled my nostrils, and the rolling lawn that skirted Hawken School came into full view. The gateway to the Hawken Upper School was a great barn that stood defiantly red with a black rooftop, in contrast to its pastel, bucolic surroundings. Erect and invincible, brick silos with dormer windows stood like loyal sentinels. It even dwarfed the grand White House mansion, which stood at the opposite end of campus with its pompous pillars.

As students lined up to pile off the bus, I at first remained glued to my seat. Through the window, I watched a parking lot of shiny cars gleaming in the morning sun. Mercedes, Jaguars, BMWs, a Corvette or two, and here and there a Cadillac, the ride I was most familiar with because a pimp named Elrod used to cruise our neighborhood, the King-Kennedy Estates, in a lavender Cadillac El Dorado.

Then, nervous still, I stepped off the bus and took in a gulp of air sweet with straw and pine. Gone was the taste of the choking, black soot that burst from exhaust pipes of the big Regional Transit Authority buses as they lumbered through the streets of Cleveland.

A gravelly, dusty road cut through forest, past a rough lawn leading up to the main building. It was nothing like my old school, Kennard Junior High School, the aging, three-story brick building ensconced between the Portland Outhwaite Recreation Center and the Carver Estates housing project in Cleveland. Hawken's main academic building was a long, low, rambling ranch. Only two stories high, it was topped by a cupola with four windows, a single spire reaching toward heaven.

My clammy hands gripped tighter my five new notebooks. Head down, I made my way to class by myself. [email protected] Reprinted with permission of Gray & Company, Publishers. Do I Dare Disturb the Universe? (softcover / $14.95 / 272 pages) is available at Northeast Ohio bookstores and online from Amazon.com. For more information, call Gray & Company, Publishers at 800-708-2819 or visit grayco.com.