FedCup: No Serena Williams, But This U.S. Team is a Treat 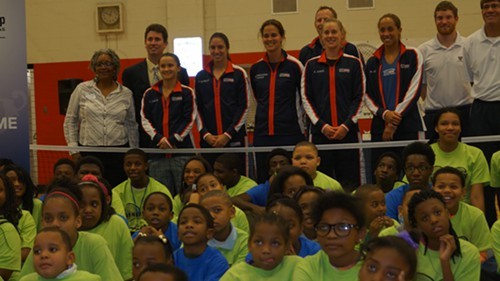 The U.S. Fed Cup is the female equivalent of the Davis Cup and has been dubbed, in promotional literature, “The World Cup of Tennis.” Matches this weekend at Cleveland’s Public Auditorium downtown will pit four of the brightest young stars in American women’s tennis against their Italian counterparts. It promises to be water slide fun for sports fans across the region.

Madison Keys (#37 in the world), Alison Riske (#46), Lauren Davis (#59, and a Gates Mills native!) and Christina McHale (#62) have been dutifully preparing for their matches and participating in community engagement activities to promote this weekend’s competition and generally grow the sport.

At a press conference Wednesday, local celeb Davis said that playing in Cleveland was both a “pleasant surprise” and a “huge honor.”

All four women communicated their enthusiasm for the venue — Riske called it “something special” — and the opportunity to play for the United States on the world stage. They're all just basically super amped and having a wonderful time together. One suspects that that presence of Serena Williams (the World's #1) in some ways might corrupt their camaraderie, which I hasten to acknowledge has swept me personally away.

Folks, don't fret that Serena's not in Cleveland. These young women are magnificent to watch, on and off the Premier turf. They are indeed extremely young — Riske, at 23, is the oldest among them — and they have about them the unostentatious glow of a high-school clique everyone wants to be a part of for all the right reasons. In other news, they hit the absolute daylights out of tennis balls. Keys' ground strokes have enough mustard for Progressive Field on dollar dog night. They are "ready" and "happy" and "thrilled to be here."

Plus, just to illustrate their off-court goodliness: At Thurgood Marshall rec center Wednesday afternoon, the U.S. team played some tennis games with the children of the Inner City Tennis Clinic (a USTA initiative to promote literacy, wellness, and tennis in urban areas). Mayor Frank Jackson attended as well, though made no official statement and didn’t appear to interact with the team at all. One of these games was called "Buckethead" or something, in which the U.S. players put laundry baskets on their heads while the kiddies hurled foam tennis balls at them. It took conscious effort to recall that these were some of the finest athletes in the world, and not just four young ambassadors with big smiles and big hearts, etc.

Mary Joe Fernandez, a former pro player who resides in Chagrin Falls and is married to Roger Federer’s agent, Anthony Godsick, is the U.S. team’s coach, captain, and emotional ballast. When entering media events in their patriotic wind suits, Fernandez and her brood represent a sort of sporty incarnation of the Little Women ensemble.

Scene will be covering this weekend’s matches online and on Twitter (follow @SceneSallard). Single-day tickets are $25 and can be purchased at USTA.com.