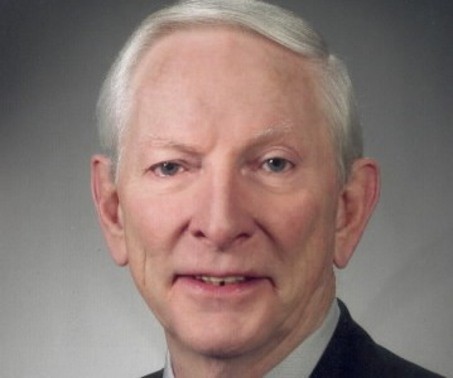 
Gerald T. McFaul, the longest-serving sheriff in Cuyahoga County, died Saturday at the age of 87.

The throwback politician who prided himself on being a fiery Irish Democrat while rising from a pipefitter to a Cleveland City Council member in 1967 was elected as sheriff in 1977 and served until 2009.

“With the heaviest of hearts, Heaven has gained another Angel, DAD,” McFaul’s son Jerry posted on Facebook on Saturday. “You will be missed!! You were my hero.”

McFaul was known for wearing a suit, not a sheriff's uniform, and also said he never carried a gun.

"I once carried a gun, and it kept pulling my pants down," he once told The Plain Dealer.

The former sheriff resigned in 2009 amid a Plain Dealer investigation into how he operated the Sheriff’s Office without scrutiny for decades. His political career started to crumble in January 2009 after he laid off more than a dozen employees and eliminated the rank of sergeant while promoting his relatives and friends.

He resigned March 25, 2009 after The Plain Dealer reported he collected “envelopes stuffed with cash from employees” on his birthday and at Christmas. State agents raided the Sheriff’s Office the next day.

In 2010, McFaul pleaded guilty to two felony counts of theft in office and a misdemeanor ethics violation. He was sentenced to a year of house arrest in addition to fines and restitution. He agreed to pay $131,000 in restitution. but a state investigative report said McFaul may have accepted more than half a million dollars in cash from his employees.

During McFaul’s last few years in office, health problems required him to walk with a cane, and he needed a deputy to drive him to the Justice Center—when he went.

He once told a Plain Dealer reporter in 2009 that he shouldn’t be investigated because he promoted the reporter’s “Puerto Rican” people. The reporter was Mexican.

His mouth once brought him national attention.

The nationally broadcast "A Current Affair” once aired McFaul’s taped vulgar phone tirade against a former lover, who was suing him.

"I'm fast-witted but sometimes half-witted," he told The Plain Dealer.

When legal troubles forced McFaul from public life in 2010, a longtime friend, Ray Wohl, clerk of Berea Municipal Court, said his wild reputation wasn’t accurate. He called McFaul a “Teddy Bear” who carried around a second-grade photo of his wife in his wallet.

In his resignation letter, McFaul cited his poor health as his reason for leaving. Weeks earlier, he declared the news articles wouldn’t force him from office. He said he ran a good office and deserved more "pats on the back than kicks in the rear end."

Kevin McFaul, Gerald McFaul’s other son, called his dad his hero on Facebook on Saturday.

“He certainly will be missed,” McFaul wrote. “The toughest man I've ever known. May He Rest in Peace.”

Mark Puente is a former investigative and crime reporter at The Plain Dealer, Tampa Bay Times, The Baltimore Sun and Los Angeles Times. His reporting in 2009 led then-Cuyahoga County Sheriff Gerald T. McFaul to resign and plead guilty to theft-in-office. Puente was part of teams that were finalists for Pulitzer Prizes in 2016 and 2020.