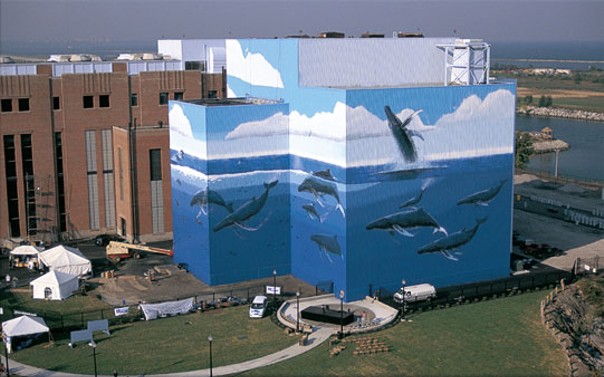 Photo via Wyland Foundation
Update: The giant mammal-themed mural, seen on the Cleveland Public Power Plant just off I-90, is getting that previously-announced paint-job this week.

“This year marks the 50th anniversary of 1969 Cuyahoga River fire,” said Wyland Foundation president Steve Creech in a statement. “The Wyland murals have always been intended to raise awareness about clean water and healthy oceans, so we couldn’t think of a better time to restore the mural than this year.”

The large artwork will also be rededicated upon completion on Friday. People are encouraged to stop by and watch the artist at work during the restoration process.

***
(Original Story 4/4/2019): Muralist Robert Wyland arrived in Cleveland yesterday to announce intentions to update his giant mammal-themed mural "Song of the Whales," which can be viewed on the Cleveland Public Power Plant just off I-90.

Painted in 1997, the whales (which there are none of in Lake Erie) have faded with age. The mural update is estimated to cost around $30,000, about a dollar per square foot.

“I’ve been touching up quite a few lately,” Wyland recently told Ideastream. “If I can’t do it, I encourage local artists and painters to get together to try and save as many of these murals as I can.”

The artist also talked about efforts to improve water conservation in Northeast Ohio through his Wyland Foundation. People can donate to the project through Wyland's foundation.

Check out all 100 of Wyland's whale murals, which are found on sides of buildings throughout the world, right here.