GOP-Proposed Ohio Legislation Would Include Possible Murder Charges for Abortions 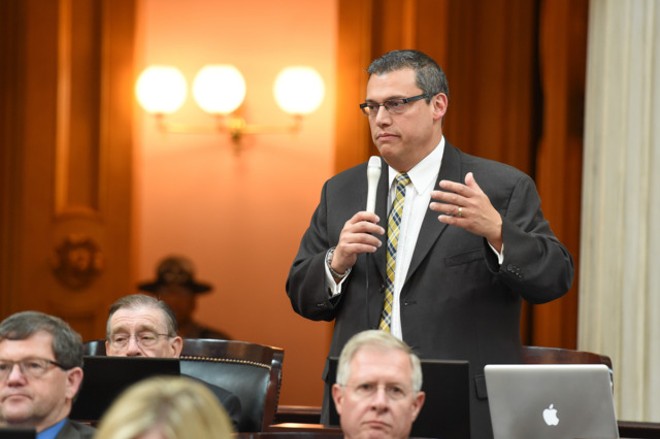 State Rep. Ron Hood OHIO HOUSE OF REPRESENTATIVES
Flexing their renewed majority in Ohio's House of Representatives, Republican lawmakers last week passed a number of pieces of staunchly conservative legislation. Those included a potential law co-sponsored by Republicans Ron Hood and Christina Hagan that would outlaw abortions after a fetal heartbeat is detected — as soon as six weeks after conception.

But another bill in the House also co-sponsored by Hood, along with fellow Republican A. Nino Vitale, is even more conservative.

HB 565 would seek to abolish abortion in the state of Ohio by stipulating that both doctors providing abortions and women seeking them could be slapped with criminal charges for doing so. The bill would also define a fetus as "an unborn person," opening the door to murder charges that could carry life in prison or even death penalty specifications for the woman or her doctor. There would be no exceptions for rape, incest or for pregnancies that threaten the health of the mother. Under the proposed law, unintentional loss of a fetus during a medical procedure would not count as abortion.

Hood and Vitale say the measure is meant to protect the lives of the unborn and, according to Vitale, protect women from the "trauma" of abortion.

The legislation clearly flies in the face of interpretations of the U.S. Constitution set up by the landmark 1973 U.S. Supreme Court decision Roe v. Wade, which guarantees access to abortion up until a fetus is viable outside the womb. In the (as of now) unlikely case that HB565 was passed into law, it would almost certainly set up a legal battle that could go to the U.S Supreme Court. That's something many boosters of the bill and similar legislation would actually like to see, however. After President Donald Trump's appointment of two conservative U.S. Supreme Court justices, some conservatives believe that the high court might amend or overturn Roe entirely, given the right case.

Hood has made it clear HB565 and the "heartbeat" bill are both aimed at this goal.

“House Bill 258 is the vehicle that is needed to revisit Roe v. Wade,” Hood said in a statement following the heartbeat bill's passage. “The House passage of the bill is a critical step in that long-awaited process."

"Anti-choice extremists from the Ohio Statehouse to the White House are lining up their dominoes to topple Roe v. Wade and punish those who seek or provide abortion care," NARAL Pro-Choice Ohio Executive Director Kellie Copeland said in a statement following the bill's initial introduction in March this year.

Planned Parenthood of Southwest Ohio spokesperson Danielle Craig called it "the worst intrusion on a woman's reproductive rights by the Ohio legislature to date" and "blatantly unconstitutional" in a statement earlier this year. Craig said if passed, the legislation would cost Ohio millions in court costs. Ohio has already spent several million in court battles over less-restrictive abortion regulations lawmakers have passed, often losing.

Right now, the bill seems to have little chance of passage. Only about 20 other Republicans in the 100-member House have signed on to support it, and the less-restrictive "heartbeat bill" only passed the house with 58 votes — two votes short of the threshold needed to override a promised veto from Ohio Gov. John Kasich. The outgoing Republican governor vetoed similar "heartbeat" legislation last year, though he did sign a 20-week ban on abortions. Incoming governor and current Ohio Attorney General Mike DeWine, however, has said he will sign a heartbeat bill. It's unclear if he would also sign an outright ban on abortions such as HB565.

Despite its current slim chances of passing, HB565 sponsors say they will keep pushing.

"I believe life begins at conception so the goal of this bill is to, first of all, continue to get the word out that life does begin at conception and move the debate in that direction and to protect unborn Ohioans from being aborted," Hood said when the bill was introduced this spring.