How Did an Ohio Kennel Get Involved in Dakota Access Pipeline Security?

An Ohio kennel made headlines earlier this month when a truck bearing its name and logo was photographed at the Dakota Access Pipeline in North Dakota. There, thousands of Native American protesters have been encamped to stand in solidarity with the Standing Rock Sioux tribe and to rally against the construction of the pipeline on sacred tribal land.

Dogs and handlers from Frost Kennels, based in Hartville, Ohio (down near Canton, close to Mount Union) became entangled with protesters on Saturday, September 3, after protesters broke through barriers and the Frost dogs became aggressive, barking at and biting several demonstrators.

Democracy Now's Amy Goodman, reporting from the melee, confronted a Frost handler later identified as Ashley Nicole Welch (in the video above at ~3:10). Welch's personal information was subsequently released by the hacktavist collective Anonymous, spurring a deluge of hate mail directed at Welch and at Bob Frost, who owns and operates the kennel.

On September 14, Yelp.com began removing posts from the Frost Kennels page as part of a "clean-up process" due to posts "motivated more by news coverage than the reviewer's personal consumer experience."

Frost, who is 29, spoke to Scene after he and his team of 10 dogs and seven handlers returned from North Dakota. He said he's been angered by the storm of negative coverage, and that people have misrepresented the nature of his work — he has repeatedly been characterized as a "mercenary," for instance.

He wouldn't disclose the terms of the contract with Dallas-based Energy Transfer Partners — or even whether or not other security companies were on site at the Dakota Access Pipeline — due to a confidentiality agreement, but he did say that he submitted an intentionally low quote for his company's services in an attempt to secure the bid and get noticed on a larger stage, to gain experience and exposure for bigger security jobs.

"If people knew what we charged for this, they'd say we were crazy for doing it that cheap," Frost told Scene.

He said that his kennel in Hartville does more than just security — everything from everyday on- and off-leash obedience to "full-blown dual purpose police dog" training — and that he works with an estimated 120 clients regularly.

"I'm doing a Parkinson's dog right now," he said. "I'm doing a seizure response dog for a girl locally. We do everything."

Frost said he and his crew returned to Ohio two days after the publicized confrontations at the pipeline.

"We didn't sign up to go out there and go to war with people," he said. "We went out there to patrol an area."

And he rejected the idea that his dogs were trained to be vicious toward protesters. 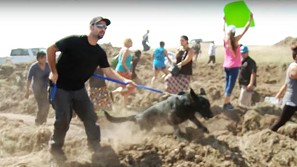 YouTube.com: @DemocracyNow screenshot
"It started out peaceful," Frost said of the day's demonstrations. "But as soon as you tear a fence down, come in charging and screaming and throwing stuff, that's not peaceful. Throwing water bottles at our faces? That's not gonna kill us, but our dogs are gonna bark when people run at them. That's what they're trained to do. "

Asked if the reports of the dogs biting protesters were true, Frost said that yes, some protesters were bitten. But no children were bitten, he stressed. "I'm a dad of three, and here's my honest-to-God opinion: If you're a parent and you're going to take your kid somewhere where you're knocking down a fence and going after people, you're a moron for taking your kid. Soldiers don't take their kids to Afghanistan."

He also said that three of his dogs were injured: Though they are fine now, he said, one was concussed, another had "a shoulder issue," and another was hit in the head with a wooden object.

Frost said he was upset reading claims that he and his company were racist, particularly toward Native Americans.

"You don't know anything about me," he said. "My wife's half Native American. My father-in-law's 100 percent. Kiss my ass... As far as the pipeline goes, I'm not for it or against it, but when I'm contracted to stand in a fenced-in area, patrol an area and protect equipment, using dogs as a visual deterrent, that's what I'm going to do."

Questions remain, however, about the legality of Frost Kennels' work. In Ohio, private security firms must be licensed by the state's department of public safety.

That has no bearing on work outside Ohio, but Frost Kennels currently isn't licensed in North Dakota either, at least not according to the current listing of license holders from that state's Private Investigation and Security Board (PISB).

Though calls to PISB were not immediately returned, a voicemail greeting advised that the office has received complaints about the Dakota Access Pipeline, and due to the nature of their investigation into the matter — it was said to be open and ongoing — the office would provide no further comment.