"It's Not Racist!" And Other Responses to Wahoo Protesters at Home Opener The zealot in redface pictured above, outside Progressive Field before the Indians' home opener this afternoon, was featured on Deadspin and instantly became the object of scorn and disbelief nationwide.

Who would have the balls and the stomach, most reasonable Americans asked, to confront a person belonging to a specific race of people while dressed and garishly made up in a costume which mocks (or at the very least trivializes) that specific race of people, and then inform that person that he could not possibly be — and in fact, had no right to be — offended by the costume and the makeup .

But that's precisely what happened.

This guy, whose last name was Rodriguez and who fancied himself a kind of spokesman or public defender, strode over to the Anti-Wahoo protesters, many of them from the American Indian Movement, with a mind to spar.  (This was probably about 2 p.m., before the tallest tidal wave of endurance-pre-gamers descended from bars in the vicinity). He kept insisting that he was an Indians fan — an Indians fan! — (i.e. that his actions, thereby, weren't subject to the scrutiny of law or taste?)

"It's Cleveland pride," he later told a Channel 5 reporter. "That's all it's about."

When asked if he'd feel comfortable arriving to a game in blackface, you know, like if his team were the Cleveland Blacks, he repeated only that he was an Indians' fan.

Though protesters have been railing against Chief Wahoo at opening day for decades, the recent vocal opposition by city councilmen and the "historic stance" of the Plain Dealer's editorial board has pushed the issue more centrally into local conversations. 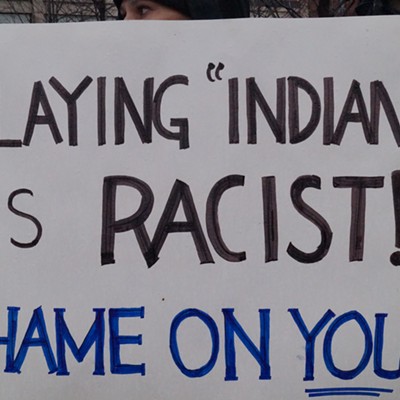 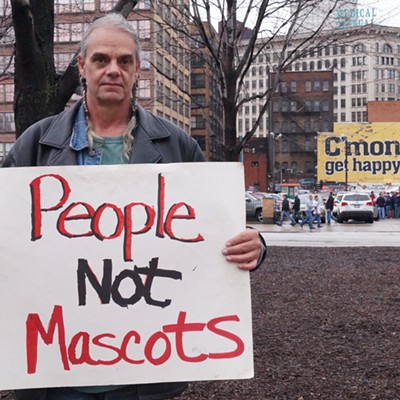 The crazy thing about this afternoon's protest in general and the encounter above specifically was the lengths to which the Pro-Wahoo crowd is prepared to go (and here I primarily mean logical lengths) to deny the legitimacy of those offended by the logo.

The staunch, redfaced Rodriguez refused to acknowledge that the Native American man standing before him — Robert Roche, of the Apache Nation — could possibly take offense. Rorche literally told him he was offended by Chief Wahoo and the use of tribal feathers and redface, and Rodriguez just kept shaking his head.

It's actually a shame for the civil Wahoo supporters that their comrades put on such an embarrassing and primitive display this afternoon. Only twice in three hours did Pro-Wahoo folks talk politely with the protesters about the root of their opposition and try to explain their own difficulties with the dehumanizing logo. (One man turned his Wahoo hat around as a little peace offering).

For the most part, though, passers-by hurled insults. A handful of boozy risk-takers sporting "Keep the Chief" tees walked directly in front of those holding signs, to taunt. Others distributed individual middle-fingers to each protester while inviting them to fuck themselves. Others launched the familiar hate speech — "Go back to the reservation," etc.

Here's a quick rundown of the rhetorical strategies at work today. (All of this I personally overheard.)

1) De-legitimize the anti-Wahoo argument itself:

—"No one thinks it's racist!"
(Bold indeed, given the protest).

—"Talk to Obama if you think it's racist."


2) De-legitimize the anti-Wahoo protesters themselves:

—"They're not even Indians." (Quite a few of the protesters weren't Native American. Nice work!)

—"It's funny cuz they all look homeless."

—"Find something better to protest."

—"That guy has four college degrees." (About a fellow, a white male, who looked Robert Roche in the face and told him that his life could not possibly have been affected by Chief Wahoo, then proceeded merrily down the "Fighting Irish" argument line, except with the Dallas Cowboys.)

—(Holding Wahoo hat aloft, a la Catholic Priest) "I'm Cherokee!"
—I'm an Indian! I am! My grandfather would laugh at all of you.

—"I guess the Dallas Cowboys should get rid of that team too, because I'm offended!"

—"You're DumbASSes. Hear me? DumbASSes!"

—"I'm a season ticket holder. Why don't you come to a game before you protest my team." (Many of the protesters were Indians' fans as well).

—From above: "It's about Cleveland Pride. That's all it's about."