Hank Kassigkeit picked up the Lumberjacks. Their fans let Kassigkeit down. 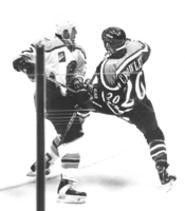 Walter Novak
The Jacks continue to take down opponents despite their off-ice woes.
It's late December, and Hank Kassigkeit is still king. He trolls the halls of Gund Arena, stopping to talk to a beefy couple in his-and-hers Lumberjacks jerseys. Theirs is a conversation of laughs and familiarity. To these fans, the Lumberjacks owner is not some distant man of means secluded away in a luxury box. He is simply Hank. One of them.

The scene would be repeated over countless nights during the fall and early winter: Hank chatting up Dad, while the kids fumble with oversized popcorn boxes nearby. Hank laughing in the cheap seats with men clutching beers who badly require a barber. Unlike Lerner, Dolan, and Gund, Kassigkeit took to his franchise like the owner of a small café, circulating among his customers with jokes and pleasantries. The only thing missing was a coffeepot, perched in his hand to fill that half-empty cup. He spoke with assurance and spirit in those days. Sure, he had just purchased a team on the verge of collapse, a team whose debts were cussed by bookkeepers from Cleveland to Canada. When he came aboard October 4, there was no radio contract, no advertising campaign; the season ticket base had fallen to half of the previous season. But none of this seemed to bother Kassigkeit. His specialty was rebuilding "distressed" companies. The Lumberjacks would simply be another he pulled from the brink.

Scroll forward to the dawn of February. Only days before, Kassigkeit sent letters to Gund officials and the team's parent club, the Minnesota Wild, informing them that, if a bailout wasn't forthcoming, he would cease operations January 31. The International Hockey League responded by suing him for breach of contract.

Last week, Kassigkeit was still couching his words in anything-can-happen optimism, but they came with little conviction. Just four months into the resurrection, the man who would be savior had flamed out.

Ask if he underestimated the problems or overestimated his abilities, and Kassigkeit deflects the question. He is clearly tired of assessing such matters. "The only thing I'm disappointed in is the fans," he says.

It's the reflexive sentiment of a man defeated. After all, someone who's made his way in the land of supply and demand should know that no one owes him patronage. Besides, the Lumberjacks' collapse was cast years before he arrived. This year's average attendance of 3,800 a night -- worst in the IHL -- merely hastened the fall.

Talk to former front-office employees, and they'll speak of nights in '96 when the crowds numbered 10,000. They'll say then-owner Larry Gordon once boasted of receiving a $10 million offer to buy the team. But the success was largely artificial. Though the Jacks claimed an average attendance of 7,000 last year, only 2,700 were paid.

In the front office, the team's fiscal condition was evident. When one employee began work two years ago, he says there were 30 people on staff. By the time he left prior to this season, turnover was so high that he was the 24th to depart. At one point, management asked him to work the IHL all-star game -- and wanted him to buy his own plane ticket to the game. "Everybody was wondering if their keys would work when they showed up for work," he says.

Only a few years after Gordon's claim of a $10 million offer, he sold the team in October for $1.8 million. It wasn't even enough to cover the debt, which employees say was $2.5 million-$3 million at the time. (Gordon, who now lives in Mexico, could not be reached for comment.)

Four months later, the debt has grown untenable once more. Jacks faithful say the problem is obvious: Cleveland simply isn't a hockey town. The Jacks, they note, are the city's fourth pro team to fail in the last 30 years.

Hockey town or not, the argument is largely irrelevant. Columbus isn't a hockey town either, but its minor league team played to capacity before giving way to a new NHL team, the Blue Jackets, which averages 17,134 a game. There are six minor league teams in Louisiana alone. Omaha has an amateur team that sells 7,000 tickets a game. Such facts speak to hockey's status as America's fastest-growing game, irrespective of locale.

"Anybody can be persuaded to do anything," says Jeff Cadlub, who worked corporate sales for the Jacks before assuming a similar post with the Carolina Hurricanes. "It's all about marketing, entertainment, and bang for your buck."

But the key to minor league sports is minor league prices. Kassigkeit lowered upper bowl ticket prices to $8, yet the cheapest seat close to the action is $18. Gund concession prices still run in the $4-for-a-box-of-popcorn vein, while outside, parking lot owners want $10 a car. Such fees don't give birth to a family-friendly experience.

"Ticket prices are not the problem," says fan Dan Mackerty, who coaches youth hockey in Garfield Heights, "but I do have a problem getting raped at the concession stand and in the parking lot."

Yet Kassigkeit had no control over concessions or parking, nor did he get revenue from either. For that privilege, he still paid more than $10,000 a game in rent -- more than twice the league average. (Gund CEO Jim Boland declined comment on the arena's relationship with the team.) Add in the cost of flying an entourage to places like Salt Lake City, Winnipeg, and Houston -- and a team payroll that surpasses $1 million -- and one needs to sell a lot of $8 tickets to keep the checkbook from bleeding.

Then there is the problem of Gund Arena itself. In the best of all worlds, a hockey game is a wild, raucous affair, like a Turkish prison with an open bar. But nights at Gund Arena held the solemnity of early Mass. With 3,800 people filling 20,000 seats, it was a study hall for purists, not a spectacle where Mom could people-watch, where drunk frat boys could scream and spill beer on one another. Worse, the Jacks play second fiddle to the Cavaliers at the Gund, which leaves the team with uninviting dates like 12:30 p.m. on Saturdays and 4 on Sundays.

In retrospect, it's hard to fathom how an astute businessman like Kassigkeit would buy a dying franchise that's being strangled by a building that produces no revenue, while it simultaneously kills any sense of atmosphere. "It looks to me like they were in over their heads," says Jason Ward, former director of ticket operations.

As Scene went to press, Kassigkeit was still in mediation with the Wild and the IHL. But he hints that the real reason for the Jacks' collapse has yet to be revealed. "There's other reasons," he says. "Everybody's been told what we've wanted them to be told. The truth will come out."