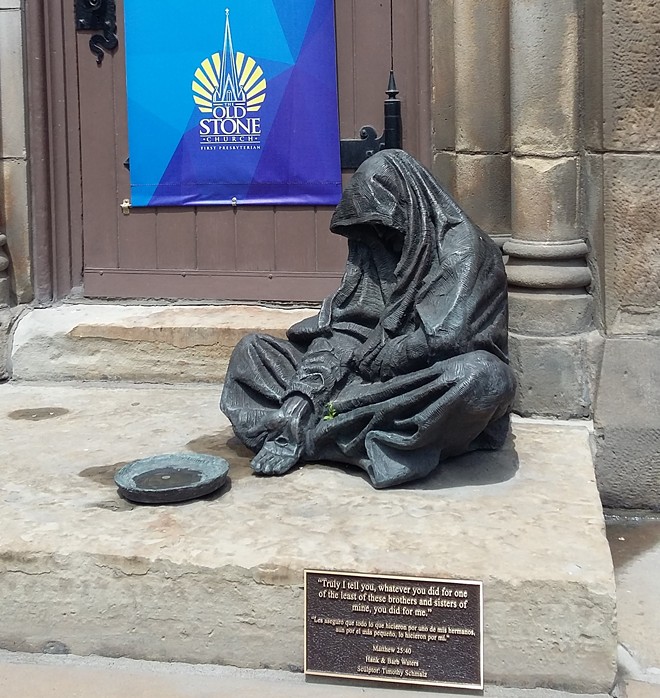 In October, 2020, a bronze statue depicting a "Homeless Jesus" went viral. Twenty minutes after it was installed outside St. Barnabas Episcopal Church in Bay Village, someone called the police, mistaking the statue for a person experiencing homelessness.

The local Community West Foundation, which had acquired the statue by Canadian sculptor Timothy Schmalz, believed it accomplished exactly what it was designed to: spark conversations about empathy and social justice.

Spurred on by that incident, the Westlake-based Foundation began conversations with Schmalz about acquiring more of his work. The "Homeless Jesus" piece is in fact part of a set of six statues forming the "Matthew 25 Collection." They are based on the 25th Chapter of the Gospel of Matthew.

The Community West Foundation formally acquired all six statues this summer. It announced this week that, after some delay, the statues are now being installed, just in time for Christmas, at locations concentrated on the near west side.

All new installations, except for the Urban Community School location, should be complete by the end of Thursday. Due to construction on the UCS campus, "When I Was a Stranger" likely won't be permanently installed until Spring.

The final statue, "When I Was Hungry and Thirsty," is owned by the Old Stone Church on Public Square and has already been installed. (Photo above.)

According to the Community West Foundation, Cleveland will be only the second city in the world—after Rome, Italy—to have all six bronze sculptures in the collection on display at once.