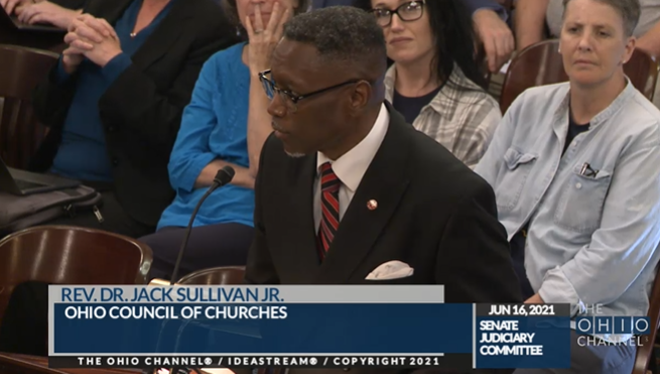 
Supporters of a measure to eliminate the death penalty in Ohio include religious and legal leaders, who say the concept is both a waste of the state’s money and time, and unethical.

“The death penalty is the most inefficient government program in existence in Ohio today,” said Timothy Young, Ohio’s state public defender. “I don’t say that as an opinion; I say that as a fact.”

Young and others stood in support of Senate Bill 103, which seeks to abolish any future possibility of death penalty sentences, favoring a charge of life imprisonment with or without parole, depending on the offense.

Citing data from the Death Penalty Information Center and state data, Young said the amount of people exonerated after a death penalty system (one in five convictions) or those left in the system awaiting appeal makes the execution sentence one full of mistakes and risks.

“If one out of every five airplanes that took flight crashed, would we tolerate that error rate?” Young asked the Senate Judiciary Committee during a recent hearing on the bill.

Along with the exoneration rate, Kevin Werner, of the Ohio Justice & Policy Center, said the pervasiveness of racial bias in death penalty cases raises more red flags about the justice in execution by the state. Ohioans to Stop Executions, which has been one of the biggest proponents of execution abolishment say 33% of people executed in Ohio are people of color, despite the fact that only 15% of Ohio’s population is made up of people of color.

“The fact that innocent people have been sentenced for crimes for which they had zero involvement is, in and of itself, reason to repeal the death penalty,” Werner said.

The impact the death penalty has on the justice system and defendants is significant enough, abolishment advocates say, but the burden it places on victims and those close to victims — called co-victims — it equally impactful.

The Rev. Dr. Jack Sullivan, Jr., spoke to the committee as the executive director of the Ohio Council of Churches, which comprehensively opposes the death penalty. But he also came as a co-victim, the brother of a woman murdered in Cleveland 24 years ago.

“I am poised to advance the belief that whether the life-ending act is carried out on a Cleveland street or in a Chillicothe prison as authorized by the state, killing is wrong,” Sullivan said.

Sullivan said co-victims have the right to feel enraged at those that murdered their loved ones, but those reactions are to “the calculated, unethical and immoral decision-making that drove other human beings to engage in grotesque, murderous acts that abruptly or gradually ended the lives of other human beings,” something in which Sullivan says the state should not also be involved.

Abolishing the death penalty appears to have growing bipartisan support within the Ohio legislature, and increasing public support as well.