Leonard Shelton fought in the Marines for 20 years. Now he fights for sleep 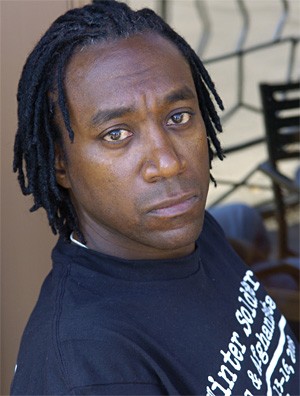 Walter Novak
Leonard Shelton was kicked out of the Brecksville VA for "aggressive behavior."

Back in 1991, Leonard Shelton had a front-row seat when Saddam Hussein's retreating troops lit up Kuwait's oil fields. Shelton was an able-minded badass back then, nothing like the empty mortar casing he is today. As he sits in a Lakewood Starbucks, talking about his recent speech in Washington, D.C., he fidgets constantly, eyes checking the door. Today, talking to Shelton is like talking to a man about jump from a ledge.

Back then, though, he was sitting atop a small tank, watching the orange fire blast over the horizon like a geyser. Around him was desert, dry sand layered with the blackened residue of battle. He'd fought for three days straight, out in the open, our tanks and theirs, nothing to hide behind but the occasional shield of dust. He'd watched fellow Marines turn to ash. And now he felt something that he didn't think possible. Droplets were falling from the sky.

"But it wasn't rain," Shelton recalls, blinking furiously. "It was fucking oil."

Shelton wishes he could forget, like everyone else. We stopped reading the stories months or years ago, when we began to know the headlines before they appeared on our kitchen tables: Bomb explodes in Haditha, killing nine; Four soldiers die when their Humvee rolls over an IED; Suicide bomber detonates a bomb at a wedding party, killing 23 and injuring 34.

Shelton, though, can't clear the slate. The ragtag soldiers keep marching through his head, stepping on the IEDs of his mind. He can vividly see Iraqi soldiers running at him, blood trickling from their ears.

"They were waving white flags," he says on a recent morning, sitting in the coffee shop up the street from his apartment. "Had nothing on but beat-up clothes, shoes with the fronts cut out exposing their toes, a jar for water, and an onion."

As he talks, Shelton closes his eyes to stare directly into the memories. Latte-lugging patrons give him quick, nervous glances. They can see the coiled-up tension inside his body, although he bears no visible signs of his life as a warrior: His body possesses two healthy legs. His fingers are intact. In place of the buzz he wore for a quarter-century are black locks that reach just past his eyes. He dons angular framed glasses, popular with the literary set.

But behind the wardrobe is a cripple.

Shelton grew up in a broke and dysfunctional family on Cleveland's East Side. The summer before his senior year at John Adams, he went to Army basic training at Fort Jackson, in South Carolina. After he graduated from high school in 1984, he became a military cook, stationed in Parma. He spent three and one-half years doing that: No fighting. No adventure. Just the cracking of eggs on the griddle each morning.

The job gave him plenty of downtime. That's when he first watched The Boys in Company C, the 1978 Vietnam War movie whose movie-poster slogan would become the tagline of Shelton's life: "To keep their sanity in an insane war, they had to be crazy."

After watching the movie, Shelton enlisted in the Marines. He wanted the glory: the sword and the semper fi and the courage of men — boys actually — acting beyond what they thought possible of themselves. He started as a security guard at a nuclear-weapons facility in New Jersey. Soon, though, he was a leg grunt — a foot soldier stomping through Camp Pendleton, California. Later, he became a gunnery sergeant, commanding tanks that he led into combat.

After Desert Storm, he came home and became a drill instructor. "I was doing okay," he says. "Until they called up our unit after 9/11. They sent us to Kosovo to go hunt for Osama bin Laden." He pauses briefly. He wants to make sure he's being understood. "They made us hunt bin Laden in Kosovo. He wasn't anywhere near Kosovo. Everyone knew he was supposed to be in Pakistan."

Shelton sensed it was a dead-end mission. As he drove through the mountain passes of Kosovo — and as Osama dug tighter into Pakistani caves — he lost it, he says. With no firefights or terrorist captures, he spent his days arguing with his company commander. And although he was surrounded by peers, he felt alone in his head. The commander eventually fired him and ordered him home for a mental-health evaluation. Back at West Point, doctors levied what would become a diagnosis common among the troops he left behind overseas: post-traumatic stress disorder and major depressive disorder.

From the diagnosis on, the details disappear from Shelton's tale. He speeds through his recent years: He's been married and divorced twice. He hasn't seen his three children in years. He's been suspended from the VA hospital in Brecksville for being too aggressive. He's tried to kill himself twice.

These days, he lives off a meager military retirement fund and disability checks. He sleeps with a towel under his body, so the sweat doesn't soak into his sheets or mattress. When he wakes up, he prays he has the energy to leave the house. "I try my hardest to go someplace where people are at," he says. "But a place where I won't have to talk with them, like a bookstore or a coffee shop.

"And no," he goes on, "meds don't help. I was on like five, six prescriptions. They turned me into a walking zombie, and I ballooned like a human blister, gaining 30 pounds of fat. Then my dick stopped working. Hell, I'm in my forties, and I couldn't have sex. I stopped taking meds, man. They didn't do jack."

To stave off his downward spiral, Shelton took a somewhat common tack for veterans: He tried to stop the war. He spoke at local college protests, like one at Kent State last September. There's a video of him on Google, his talk brash and blunt. "When they say victory and winning and finish the job," he tells cheering crowds of Nalgene-sipping protesters, "to me their words are saying that it's okay to murder innocent people. Tell me what good comes from a six-year-old Iraqi girl having her leg blown off?"

The audience was riveted. But Shelton continued to crave the tacit understanding of war that only veterans can supply. That led him to Winter Soldier, an event in March that allowed veterans of the Iraq War — parts I and II — to tell their stories. It was organized by Iraq Veterans Against the War. They wanted to bring the headlines to life.

The event was the sequel to a gathering of veterans held in 1971 to publicize the experiences of Vietnam vets. The name "Winter Soldier" plays on Thomas Paine's famous words, which George Washington recited to his troops during the Revolutionary War: "The summer soldier and the sunshine patriot will, in this crisis, shrink from the service of their country." The brave men, though, fight on through the winter.

It was at this conference, at the National Labor College in Silver Spring, Maryland, that Shelton finally found something resembling peace.

"It was painful and emotional," he says. "But it was a place where we could all, finally, hear the truth."

Unlike the VA, where help is available from 9 to 4:30, Winter Soldier's mental-health-care staff worked around the clock. Veterans testified with confidence, knowing there would be someone waiting offstage, once they unlocked their terrors. Shelton recalls stories from soldiers like Jeffery Smith, who told of the time his team blew away a farmer and his 14 children. Their crime: working a field after curfew.

Shelton could relate. But while Winter Soldier soothed some of his wounds, it was only four days long. He spent the week after the event vomiting.

Shelton leaves the Starbucks now, slinging his backpack over his shoulders. It's a feather, compared to the one he once carried. He glances behind him as he steps toward the exit and out into the overcast daylight. Before he leaves, he asks whether his story will appear in the newspaper. But before hearing an answer, he speaks again.

"Actually, it doesn't matter," he says. "Thanks for taking the time to listen."