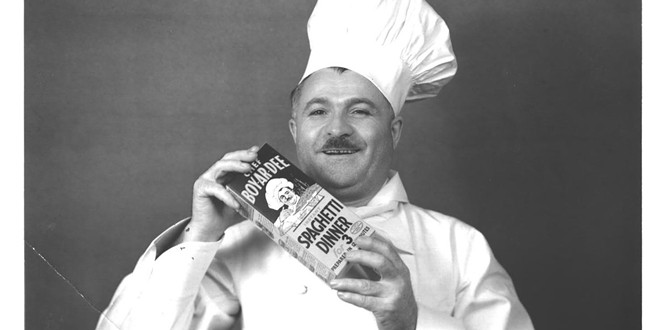 Momentum has slowly but steadily rolled into action and Problematic Statues have come down across America, which has included eyes turned everywhere to Christopher Columbus figures left standing in remembrance of his Awful Doings.

A Change.org petition implores Cleveland to remove the Problematic Emblem of Genocide, which Cleveland erected in the long-ago year of 1988, and instead give honor to Chef Boyardee.

We quote at length from the well-argued treatise:

Columbus is not someone we should celebrate. He was a racist monster who initiated the genocide against indigenous Americans. He pioneered the Transatlantic slave trade and likely sent more enslaved people across the sea than any other person. The trade in enslaved Indians was the forerunner to and the basis for the trade in enslaved Africans. According to Spanish historian Peter Martyr, a contemporary of Columbus, so many enslaved Indians died on these journeys that "a ship without a compass, chart, or guide, but only following the trail of dead Indians who had been thrown from the ships could find its way from the Bahamas to Hispaniola." Columbus also bragged in a letter about selling 9- and 10-year old girls into sex slavery. He was, as historian Patrick Wyman put it, "a dogshit person even by the standards of the late 15th century." We don't even know if Columbus was Italian. There is scant evidence to back up the notion that he was born in Genoa, something he never claimed in his own writings. He never wrote in his supposedly native tongue, and some scholars think he was Jewish, Spanish, or Portuguese.

If Italian-Americans in Cleveland want to celebrate one of their own, they need look no further than the iconic Ettore (Hector) Boiardi, AKA Chef Boyardee. Born in Piacenza, Ettore immigrated to the U.S. at age 16 in 1914. He eventually moved to Cleveland, where he opened a restaurant, Il Giardino d'Italia, that was so popular people asked him to bottle his sauce for them.

Boiardi and his brothers built a canned food empire from the ground up, opening a factory in Milton, Pennsylvania. During World War II, this company produced canned food for American soldiers 24/7. The U.S. government recognized his contributions to the war effort by awarding Chef Boyardee with a Gold Star in 1946.

It's time for Cleveland to tear down its statue to a genocidal sociopath with a bowl cut and erect a statue to an immigrant success story who enriched our community with his food and iconic mustache.

For more on the local hero, Edible Cleveland and Scene's own copy editor Elaine Cicora has a wonderful story here.