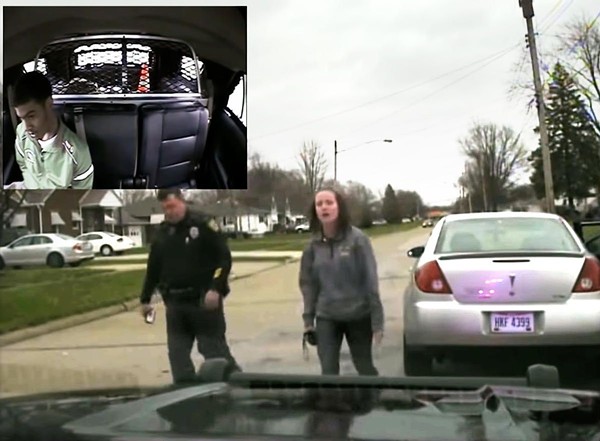 Screenshot of Dashcam Footage
Officer John Kovach Jr. was fired from the Lorain police department after an internal investigation determined he had abused his authority by conducting a traffic stop on his daughter’s boyfriend without cause and temporarily detaining his daughter and her boyfriend in the back of his squad car.

The city yesterday announced his dismissal, which technically took place on May 11, for the incident on April 18.

On that day, Kovach pulled over 18-year-old Makai Coleman. Footage from Kovach's dashcam revealed him telling Coleman, “You can get out,” as he opened the door, then saying, "You’re going to jail.”

After Coleman asked repeatedly what he’s being pulled over for, Kovach said, “You’re going to jail. Have a seat in my car. We’ll make shit up as we go.”

Kovach then took Coleman into the back of his squad car before getting into an argument with Gloria Morales, a neighbor who had come out of her home after seeing the police stop. Two of her children were in Coleman’s car.

Officer Kovach was reportedly trying to find his daughter, Coleman's girlfriend, who was sitting in the backseat car.

The officer then threatened Morales' daughter with a $300 ticket for not wearing a seat belt after Morales refused to let him search her home for his daughter's laptop. She said she was going to call 911 and he threatened to take her to jail for calling 911 over a nonemergency.

Kovach then told Morales' two children to get out of the car and join their mother before realizing his daughter Katlyn was in the back seat. He demanded "Get in my car!" at his daughter before leaving Coleman on the side of the road. The father and daughter can be heard on the dashcam video arguing before he drives away.

Kovach had actually been called to report to a road rage incident while this entire mess was unfolding, to which he didn’t respond.

In his firing paperwork, Kovach claimed he had earlier talked to his daughter on the phone and that she said, "If I can’t be with him, I don’t want to be here anymore.” Kovach said he took as a suicidal threat. Kovach then admitted to using police resources to track Katlyn’s computer to Morales home, where he sat and waited for Coleman to arrive before pulling them over.

Safety Service Director Dan Given said, “These actions are not acceptable for members of our Police Department and we felt it warranted immediate dismissal.”

The union is appealing the decision Kovach, who claims the city violated his rights by firing him.

The dashcam footage was first published by the Lorain Chronicle Telegram and is available for your viewing pleasure below.