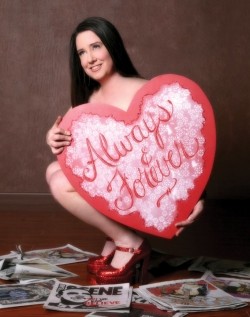 The raw material of Erin O'Brien is not the stuff of pinup legend. I am neither young nor thin and stand just a grilled baloney sandwich over 5 feet tall. I am not the sort who nips, tucks, primps or frets over the grays, or dons lipstick.

I do, however, tend to pounce on the bait of a challenge. And that's why I agreed to pose for "boudoir" photos.

But as I drove to the shoot through the swirling January winds, I agonized over what was to come. Would I look fat, short, ugly or old? What do people think I look like? What do they expect me to look like? I racked my brain trying to imagine what poses would suit me.

I stopped at a red light and watched the wind dancing in a snowy cyclone, wishing for once I were the sort of woman who whitened, brightened and lightened. Although I'd rather eat a plate of dung than go to a tanning salon, I really should have made with the tan-in-a-can, I thought, if for no other reason than to blur the tan line that persists around my ankles courtesy of my endless summer walks in sport socks and tennies. When I arrived at Posh Portraits, studio owner Sarah Kraus introduced me to Jenna Lowe (makeup) and Natalie Sanders (hair). Everyone was beautiful, young and hip. Natalie's long brown hair was sexy shiny straight with red-gold highlights. Jenna, with her fire red-hair and painted eyes, looked like she'd walked straight from the pages of Glamour magazine. Sarah was willowy with long blonde hair.

"What are you thinking, style-wise?" Sarah asked me. Bewildered, I scanned the cosmetics, applicators and hairsprays that covered the vanity. She might as well have asked me to recite the Bible in Hebrew. I buy a new tube of mascara once every three years.

"I'm all yours, girls," I said. "You decide." Then panic bloomed. "You weren't going to pluck my eyebrows, were you?"

"I was actually going to fill them in a bit," said Jenna, and relief washed over me. She had no intention of decimating my signature au naturale brows. She was going to celebrate them! I may not have been in Kansas anymore, but I had three Good Witches from points East, West and South, and these chicks were down.

"What's that stuff?" I asked as Jenna painted my eyelids. "Urban Decay Primer Potion," she said.

"Christ awmighty," I said. "Got any urban renewal in there?"

Having little to contribute to a conversation about cosmetics, I asked about clients. I learned about the "pisser," the women who come in with their mothers (a bad sign), the strippers, the "vajayjay," the woman with the filthy hair and the one "really difficult" woman who wanted to look like Kim Kardashian, which I was told is not an infrequent request. "Do you want false eyelashes?" asked Jenna.

Eventually, Natalie reigned victorious over my giant hair and Jenna had me blinking movie-starlet eyes, but my crow's feet would not be denied. "Too bad you can't erase the laugh lines," I said.

"Sure we can," said Sarah. "We'll Photoshop them right out - whoosh whoosh."

I have written volumes about Photoshop and how it distorts the human form into an impossible lie, particularly women. I have railed against the nearly pedophilic images that are plastered all over the pages of Playboy, as well as the Internet. Photoshop turns women into monochromatic cartoons, devoid of freckles and creases. It's an outrage, a sexist lie. By-god, damn-it-anyway, that web of lines beneath my eyes is part of what makes me beautiful!

Yeah, right. If I was going full monty by way of full Cleveland, it would be full throttle on the magic wand, baby.

After Natalie and Jenna had packed up their mysterious aerosols and powders, and floated into the January bluster, Sarah and I were left to the business at hand.

"Put on anything you like," she said, sweeping her arm through the "wardrobe" room.

So this is what it's like to be Paris Hilton, I thought, as I perused the shoe racks full of mules, ankle straps and slings. My dull black snow boots languished in a corner as I chose a pair of glittering ruby slippers with 5-inch heels that would surely move the Scarecrow or Tin Man to the words "Leave them on." I did not try on or even consider any other pair of shoes - I wanted that funky glitter, ankle-sock tan lines be damned. I stripped off everything save my black undies, strapped on the shoes, added a rhinestone cuff bracelet and stepped through the doors into the studio. A woman of my advanced years does not expect to be teetering on 5-inch heels, bare-breasted, before another woman with a camera, yet there I was. Life is strange.

Sarah wanted to start with a couple of test shots. So I just stood there like that, feeling awkward, probably blushing as crimson as those shoes, despite the layers of foundation on my face, and wondering what in hell I looked like with my thighs and gut and uneven boobs; the scars and stretch marks and my weird tattoo; the skin of my upper chest ruddied from sun damage incurred over a lifetime contrasted against the whiteness of my middle, which is always covered. I'd looked at my body my entire life, but at that moment, I had no idea what it looked like. I was never more vulnerable. How ironic that the only photos that made me uncomfortable were the test shots, the ones no one would ever see.

The work started in earnest. And it definitely felt like work: standing, sitting, laying on the floor, arranging props to make sure nipples and ripples were covered. Changing poses posed a challenge. There is just no elegant way to segue from lying on the floor to standing when all you're wearing is a pair of panties and sky-high maryjanes.

My mind raced. Was my back straight? Was my head at an awkward angle? Was I clenching my fingers? I was squinting. I was gaping. I wanted to look natural, but the harder you try to do that, the less likely you are to succeed. We did a number of shots while I was on my knees, and that got uncomfortable quickly. Dumb things happened. A muscle would clench up. My hair kept getting caught in the false eyelashes. Keeping the shoes in cute, sexy angles wasn't easy either. Although I will continue to refer to the women on America's Next Top Model as "silly little broads," as I knelt before the camera's unforgiving eye, I had renewed respect for all the munchkins in TyraLand.

When Sarah's clicking came to an end, I realized that somewhere between the first and last shot, she'd earned my trust completely, and if I had it to do over again, I wouldn't hesitate to step in front of her camera without benefit of shoes, undies or lipstick. Sarah could find the beauty in any subject because she believed it was there.

"You sure you've got what you need?" I asked anyway.

"If I didn't, we'd still be taking pictures," she said.

When I stepped into the laundry room at home, my husband looked up from his chore. "Who," he said, "are you?"

My kid, fascinated by the false eyelashes, reached up and tugged one.

"How are you going to get them off?" she asked.

The next day, I drafted this account, despite the lingering anxiety I had over how the proofs would turn out. When they arrived later that evening, I was quaking as I moved to open the document.

And there I was, sort of. Me, but not me. I looked like a pinup, a bombshell. Sure, the makeup and hair had a lot to do with that, but there was some other element, a magical confluence charmed together by those sparkling ruby slippers and three Good Witches. I stared at the photos, mystified.

I am back to regular Erin now, with my ponytail and hoodie, so very far away from the land over the rainbow where the other Erin stretched out her legs and believed for a moment they were a mile long. She was fun while she lasted, with her lavish eyes and hidden secrets, but she'd be awfully hard to maintain - although the shoes and heart outfit would surely garner attention at the Parma Acme.

When my Dearly Beloved first saw the proof sheet, he smiled. "I told you there was nothing to worry about," he said in his easy, understated way. "You're always my sexy little Irish," which is exactly what he told me two dozen times before the proofs arrived.

To that, all I can add is this: There's no place like home.

Visit O'Brien's February 11 blog entry at erin-obrien.blogspot.com for more photographs. Photo shoots at Posh Portraits are by appointment only. Contact information and details are available at poshportraits.com.