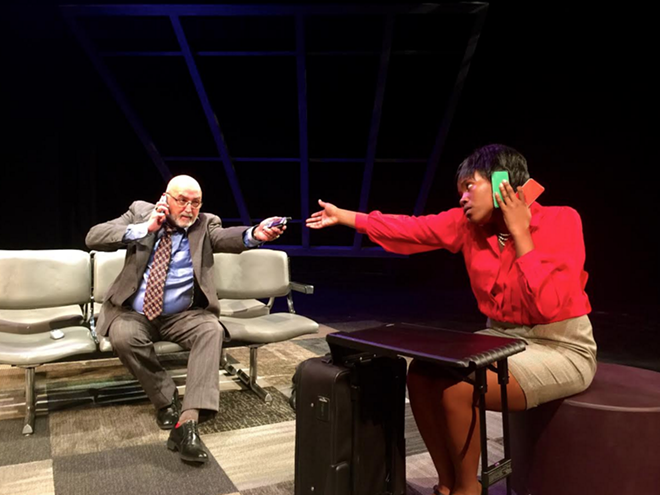 It’s weird how sometimes a concept we all agree upon can be upended, suddenly rendering that concept almost meaningless. This is especially troubling for a playwright who labors on a script for months, or years, and then opens the show in a world where all the assumptions of the play have been rendered null and void.

Take Margin of Error, now enjoying its regional premiere at Ensemble Theatre. The talented local playwright Eric Coble constructed this 90-minute show based on a lot of political common knowledge at the time. But it is opening here at a time when the current presidential race has been thrown for a loop by a candidate, Donald Trump, who has defied every single truism about what a person had to do to run for that high office.

As a result, the play feels substantially dated through absolutely no fault of its own. Who could have predicted that a presidential candidate could run for office while insulting large swaths of the population in the most vulgar terms, lie constantly, brag about wanting to use nuclear weapons, support unregulated gun sales, and even refer to the size of his penis as a reason for voting for him?

That said, Coble has written a tight and fiercely funny play about the way politics used to work, back when you had to be careful of every utterance should a lip slip lead to bad headlines the next day. Harold Carver, a bloodthirsty Republican operative known for his viciousness, is trapped in a fog bank at Cleveland Hopkins Airport, along with his aide Daphne. And he’s working a collection of color-coded cell phones, each one dedicated to a different GOP candidate (and one secret Democrat) across the country.

Deliciously played by Michael Mauldin, Carver has a way with words, using the term “Boots on neck!” to indicate to his minions the ruthlessness with which they should do their jobs. He’s out to engineer a “great Republican domination” of the political landscape, from the lowest offices to the highest, finding a way to elect often idiotic candidates as long as their names have an (R) after their names.

Based on some phone calls with his wife, Carver has problems at home which he’s juggling with his pep talks to wavering pols and managing his relationship with Daphne. In turn, she tries to prove her worth by strategizing along with him as he erupts with a volley of mini-lessons including the ultimate acronym warning: DFIU (Don’t Fuck It Up!).

Mauldin is a compressed whirlwind of repressed anger and resentment as he plies his trade in the airport’s waiting area (although a player like him would probably have a membership in all the airline lounges). He brilliantly performs Coble’s in-the-know words, showing how talking points get developed and how cardboard candidates can be made to look three-dimensional—even if stories have to be conjured up out of thin air. You can’t take your eyes off Mauldin, and he rewards you with a memorable character.

As Daphne, Mary-Francis Renee Miller holds her own and serves as a strong foil to Hurricane Carver, even though she has less to work with. Her desire to please her boss is clear, as she sees through his bluster to vulnerabilities that lie beneath.

Sure, Coble’s ending is a bit predictable, but he keeps the energy of Carver’s manic personality front and center. And it ain’t his fault that anyone who follows politics is watching the show and throwing asterisks all over the place—noting how things have changed in politics thanks to the bilious, misogynistic, racist blowhard who now leads the Republican Party.