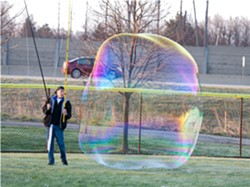 Rise early and you yourself can watch the world record attempt on happening next Saturday, June 20 at precisely 5:53 a.m. at Wade Oval in University Circle. Why so early? Sunrise is usually the ideal time for bubble-blowing when the wind and barometric conditions are at their best.

The current world record for free-floating outdoor bubbles was set in March 2015 by Sam Heath of the United Kingdom, who created a bubble with a volume of 822.23 cubic feet — less than a year after Pearlman himself set a previous record.

Pearlman is also going to attempt to break the record for indoor bubbles at the Cleveland Botanical Garden in Clark Hall. The current record, also held by Sam Heath, was 117.21 cubic feet.

Bubble-blowing is taken pretty seriously, so there will be a team on site to document the event and confirm the bubble size in accordance with Guinness's official rules and regulations.

After the two Guinness World Record attempts, Pearlman and Big Fun Toy Store will host a Bubble Palooza with hands-on activities for kids and families from 10 a.m. until noon.

In addition to bubble blowing, Dr. U.R. Awesome has an accomplished resume as a magician, balloon twister, and mad scientist working with Big Fun Toy Store and Flower Clown Entertainment.