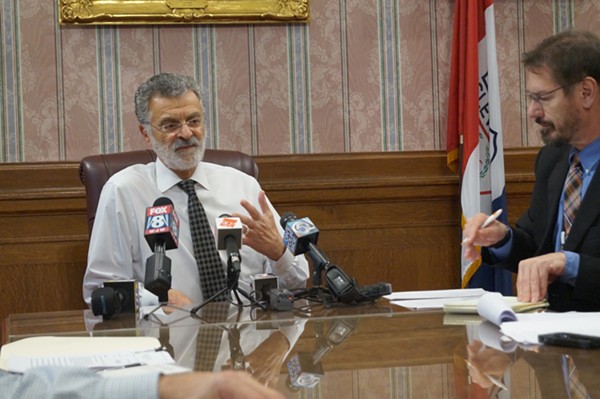 Sam Allard / Scene
Jackson addresses the media.
The 2017 Cleveland Mayoral race will resemble the mayoral races of the past 12 years in at least one striking way: Frank Jackson will be the front-runner.  In a gathering at Tri-C Tuesday night, Jackson announced that he'd be entering the fray for an unprecedented fourth term.

In what was surely the least enthusiastic announcement of all time, Jackson sort of mumbled through his key points and said he didn't even need the job. What? The 70-year-old Mayor admitted that he'd disregarded five full pages of reasons not to run, reasons he'd written down on a personal ledger to help him make up his mind.

"I only had one reason for running," he said, "and that is the people you see behind me."

He gestured to the gathered crowd of family and friends, plus City Councilman Matt Zone (the safety committee chair), Cleveland COO Darnell Brown and former council president Marty Sweeney, who hastened to get a "Frank! Frank! Frank! Frank! Frank!" chant going for the cameras.

"This is not an academic or philosophical discussion for me," said Jackson, who lives in the Central neighborhood near Tri-C. "When I speak on an issue, I speak from the heart and the experience of my life and my family."

He said the issues he faces are issues that all Clevelanders face, and he couldn't — in good conscience — walk away from them.

The emphasis on residents and their struggles echoes, no doubt unintentionally, his key challenger in the race, Ward 10 Councilman Jeff Johnson. Johnson announced his candidacy last month on a platform of returning investment to the city's neighborhoods. He has been a vocal critic of Jackson's leadership, in particular the ways in which Jackson has prioritized corporate interests behind the scenes (Johnson has mentioned subsidies for the Cleveland sports arenas and the Playhouse Square chandelier as notable examples). But the ongoing refusal to open Public Square to bus traffic, a decision that Jackson has repeatedly claimed rests on safety — despite opposition from riders and authoritative accounts that his claims are preposterous — has been the most recent, flagrant assault on "issues that Clevelanders face."

Jackson balked at Johnson's characterization, and said he'd be committed to the same priorities he's been repeating for more than a decade: the health of the school system; the safety of residents; and the equal distribution of resources, what he calls looking out for "the least of us."  His success on those key areas have been mixed.

The safety department may be the biggest challenge for the next Mayor, whomever it is. Not only have homicides risen to historic levels — an issue that councilman Zack Reed, if he intends to run, will no doubt emphasize — but the police department has never been more embittered, thanks to the reforms of the Consent Decree that officers feel cripple their ability to effectively police.

In addition to Jackson and Johnson, the current heavy-hitters in the race, six additional candidates have pulled petitions from the Cuyahoga County Board of Elections.  Scene conducted an exclusive interview with one of them, the enterprising first-time politician Ja'Ovvoni Garrison, and will run highlights from that conversation next week.

Here are the video highlights from Jackson's announcement, as assembled by Cleveland.com.