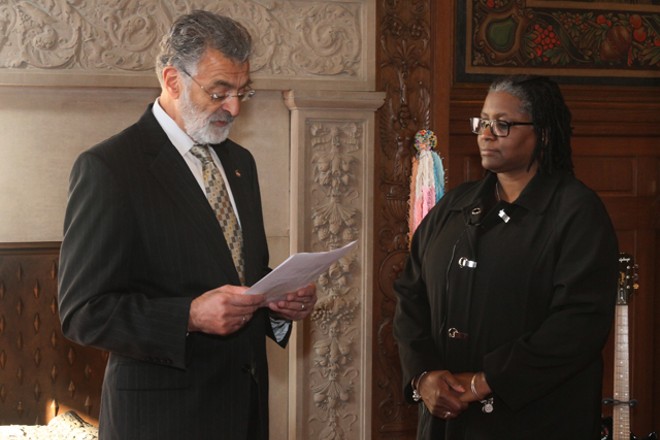 Two of 10 civilian members resigned from the Commission (the "CleCoPoCo") earlier this year.  Craig Boise, the former Cleveland-Marshal College of Law dean, took a position at Syracuse University in April; and Max Rodas, CEO of Nueva Luz Urban Resource Center, announced in January that he'd be stepping down due to the demands on his time and energy.

"I think the commission is a really important body doing vital work," Rodas told Scene at the time, "but in my opinion — and it's just my opinion —the work is too much for this small group."

Sgt. Tim Higgins, one of the three representatives appointed by the city's three police unions, resigned in March. In addition to the dwindling membership, there have been calls for Cleveland Police Patrolmen's Association President Steve Loomis to step down from the CleCoPoCo, and civilian member Anthony Body was arrested in June on a public drunkenness charge that was later dropped.

Though drama persists, the city has at least filled the body's vacancies, applications for which were due in early September. The new members are LaToya Logan, Gordon Friedman, and Police Sergeant Deidre Jones. The city provided the following bios:

LaToya Logan is a seasoned social worker who specializes in trauma, criminal justice, and crisis management. She is currently a licensed independent social worker, certified clinical trauma professional with the International Association of Trauma Professionals, and a supervisor with the Counselor, Social Worker, Marriage and Family Therapist Board of Ohio.

Ms. Logan has conducted training for community mental health agencies, mental health boards, and human service conferences. She is the founder and director of Project L.I.F.T., and has earned a bachelor’s degree in English education from Michigan State University and a master’s degree in Social Administration from Case Western Reserve University.

Gordon Friedman is a private practice attorney with Friedman and Gilbert, who specializes in Criminal and Civil Rights litigation. Mr. Freidman currently serves as the President of the Board of Trustees for the Free Medical Clinic of Greater Cleveland and as Commissioner for the Cuyahoga County Public Defender Commission.

Mr. Friedman was an adjunct professor of law at Cleveland-Marshall College of Law for the past 40 years and his previous work includes time as the Executive Director of The Free Medical Clinic of Greater Cleveland and as a staff attorney for the Public Defender's Office of the Cleveland Legal Aid Society. Mr. Friedman received his undergraduate degree from Miami University and his Juris Doctor from The George Washington University.

Police Sergeant Deidre Jones is currently a Sergeant with the Cleveland Division of Police and is the Division’s first African-American female to supervise the Homicide Unit. SGT Jones is a state certified domestic violence instructor and a federally certified domestic violence instructor-trainer through the Department of Homeland Security. SGT Jones is a graduate of the Ohio Association of Chiefs of Police (OACP) Executive Leadership College and she has completed the International Association of Chiefs of Police and Federal Law Enforcement Training Center leadership programs.

SGT Jones is a facilitator and coordinator of domestic violence-related workshops and discussion forums. She teaches local and national courses on domestic violence-related topics, and has advocated for the Division’s Domestic Violence Unit to be the primary investigator of Lesbian, Gay, Bi-sexual, and Transgender relationship violence. SGT Jones holds a Master of Public Administration from Villanova University and has been with the Division of Police for over 28 years.