My Body Tried to Tell Me My Relationship Was Awful By Not Allowing Me to Poop, A True Story I Would Like to Tell You 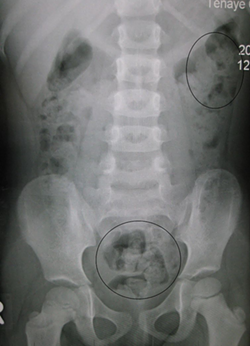 Wikipedia — An x-ray view of constipation
I’m 26 years old and my boyfriend, Charles, wants me to move in with him. We’ve been dating for four years, he just bought a house, we don’t agree on whether or not to have children, so really it’s perfect. Because I am IN LOVE, that gross sticky love that makes you not even care that you disagree about fundamental life choices because OH MY GOD HIS HAIR IS THE BEST. Charles reads Bukowski and works nights in an ICU, which means that he is the perfect combination of nurturing and emotionally dead inside. His main hobby is drinking, and when he blacks out he calls it “time travel.” He is adorable and I so want to get married and I immediately agree to move in with him.

His house is a brick flat in one of those far western Chicago neighborhoods that doesn’t have a chamber of commerce. It has an illegal third apartment in the basement but there aren’t any appliances in the whole place, so him and his friends throw a “let’s buy a fridge” kegger. They use the entire empty house and charge money at the door; a lot of high school kids show up and get wasted and he makes enough money to buy appliances. I wake up the next morning on a deflated air mattress in the illegal basement apartment of what will become my new home, next to Charles, my future husband, who’s passed out drunk on his own deflated air mattress next to me. I look at him, his mouth open, his body leaking booze, and think, “This is the beginning of my new adventure.”

Charles doesn’t want me to pay rent – he wants me to pay off my student loans instead – but he can’t cover the mortgage payment on his own, so he has an old friend move into the first floor apartment. This friend is a high school English teacher who records rap albums with his students under the name ‘Professor X.’ Professor X can’t actually cover his rent on his own so he rents out his second bedroom to a guy who used to be in the air force who is only ever introduced to me as “Air Force Guy” or AFG for short. But even with those two helping with the bills we still can’t quite afford our triple play package from Comcast so they rent out the illegal basement apartment to two guys that Charles calls “the hippies in the basement.” Except they’re not really hippies and are more like two 35-year-olds who lost 10 years of their lives dropping acid into their eyeballs. The two hippies don’t get along and I occasionally hear their screaming fights through the vents.

Charles works nights, and everyone who lives there (except me) sells weed, so people are coming and going from the house all night long, and I start to sleep with a crowbar next to my bed. Charles buys a dog to help me feel safer at night. He goes for a huge dog, an English Mastiff, and he names her “Bitches” because he’s said he’s always wanted to come home and yell, without irony, “Where my bitches at?” He does this every morning and a 150-lb. dog comes tearing toward him, so happy to see him again, so unaware of misogyny.

My new living situation is unorthodox, but I’m proud of that; my boyfriend is a homeowner, I can always buy weed as a last-minute wedding present, and I get to send out Christmas cards with a picture of my dog, wearing antlers and the caption, “Merry Christmas, Bitches.”

A few months go by and I’m at work, just after lunch, at my desk, and I suddenly feel a stabbing pain right below my rib cage. At first I think it’s gas, but it keeps growing in intensity and frequency until I start to get worried. I take a few antacids but the pain grows. It feels as if there’s a balloon covered in broken glass inside of me and it periodically inflates and shreds me and the pain is so intense that I can’t breathe until it finally deflates and the pain has passed. Until it comes again.

After an hour of this nonsense I decide that it’s time to go to the hospital. I get up from my desk and go to my boss’ desk so I can tell him that I’m dying so I’m going to take a half day.

I drive to the hospital, park and hobble into the ER. And let me tell you, if you need emergency medical attention I highly recommend that you choose Gage Memorial Hospital at 3 p.m. on a Tuesday because they having nothing going on and they will be ALL OVER YOU the second you walk in. A nurse asks me, “On a scale of 1 to 10 how would you rate your pain?” I think about it for a while and like, what does 10 even mean? Can we ever experience pain at a 10? I say 5 and she looks at me. “OK. You’re crying right now so I’m going to go ahead and write ‘8.’”

I call Charles from the hospital, “Will you come out here? I’m scared.” He doesn’t want to—it’s his day off and I just woke him up and it’s a 45-minute drive “Please,” I ask and he acquiesces. And I’m glad when he gets there because he’s the one who suggests to the nurse that I’m like white with pain so maybe some morphine? I’ve never had morphine before but now I suggest it to everyone because it is a MIRACLE DRUG. At first it goes into your veins hot and makes you nauseous, but then you ask for some anti-nausea drug and then it’s so good. You’re still in pain but who gives a shit because you also feel AMAZING and you are coming up with the best game show ideas. Like there’s one called ELF it stands for “everyone lives forever” and there’s a wheel and a clown spins the wheels and Charles interrupts me, “Yeah, that’s the kind of thing that someone on morphine thinks is a good idea.”

Eventually the doctor comes in, holding an x-ray of my insides.

“Hello.”
“Hello.”
He pulls up a rolly stool.
“So…um… (looks at the x-ray, looks back at me) Have you been pooping lately?”
I blink at him. Did not expect that question at all, but I decide to answer honestly. “I think so?”
“Because your x-ray here shows a lot of fecal matter in your colon.”
“But my pain is up here, near my ribs.”
“Yeah. That’s how high it goes.”

I am horrified and Charles is delighted, “You are literally full of shit!” The doctor recommends some stool softeners and some laxatives and a follow up with my regular physician in a few days. I take the laxatives and learn that they aren’t just pills – they’re a plan for an evening. Like, “What are you doing tonight?” “Laxatives.”

I go see my regular doctor, who is an amazing doctor, which is incredibly lucky for me because I picked her based on her name. I was going down the list of doctors in my network and I saw her name and immediately knew that Dr. Anne Frank was the physician for me.

So I go see Dr. Anne Frank and I ask here “Why did this happen?” because not pooping until I almost explode is a touch odd for me. Dr. Anne Frank smiles at me kindly and replies, “It depends, but usually it’s related to stress. Have you had any recent changes? Any major life events?” I look back at her and think.

No, not really. I mean, a few months ago I moved in with my boyfriend. And Professor X. And the Air Force Guy. And the hippies in the basement and their booming drug business and a dog whose name I can’t say around my grandmother or children. And I don’t have my name on a lease or any paperwork that says I can live there. Hell, I’m not even paying to live there. And my boyfriend isn’t ever home because he works nights and when he does get home at 8 a.m. he immediately opens up a Miller High Life and starts drinking and then he gets drunk and goes to sleep and I have to wait until 6 p.m. to try to wake him up and even then I have to sit on the bed and try to be really funny and interesting or else he’ll just ignore me and go back to sleep. And on nights that he doesn’t work he stays up all night by himself drinking Miller High Life and playing this online role playing game called Kingdom of Loathing and sometimes he gets so drunk that he falls around the apartment and it wakes me up. And I keep trying to make the apartment feel like more of my own, like by painting the living room, but then I was standing on a folding chair, painting, and I fell off and hit the ground, hard, and Charles ran over and checked on the chair and he was annoyed because I had bent it and that made me cry harder and he called me dramatic and when we’re home together at night he likes to sit on a different couch than me while we’re watching House because he doesn’t like being touched and every time we go out to eat I keep thinking that maybe, maybe this time he’s going to propose but never does.

And maybe I’m not pooping because my body knows that this is a bad situation, that this relationship isn’t going great, that it was a very bad idea to move in with a person who doesn’t agree on any of our future, but I’m also not listening to any sort of logic right now because: love. So as a last resort my body just shut down my bowels. It’s trying to get the message across to me that I AM MAKING BAD CHOICES SO I DON’T GET TO POOP ANYMORE.

But I haven’t put all of this together yet. I stare into Dr. Anne Frank’s kind eyes and I say, “I just moved in with my boyfriend?”

“Well that’s probably it. Go home, relax, and it should get better.”

And it did get better. Two years later, when my brain finally caught up with my colon, Charles and I broke up and I moved out, it got better. It got much better.