Tainted by charges of sexual misconduct, Medical Mutual executive Jerry Patrick left the company. Or did he? 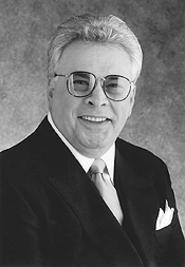 The half-million-dollar man: Jerry Patrick.
When charges of sexual harassment were leveled earlier this year against Jerry Patrick, the chief marketing officer and executive vice president of Medical Mutual of Ohio, the company seemed to do the right thing. Patrick was replaced and vanished from the giant insurer's downtown headquarters.

But Patrick is still receiving money from Medical Mutual. According to several sources, he is now working for the company out of the Fairlawn area, being paid through a three-year consulting deal.

Exactly what Patrick is doing for Medical Mutual is hard to say, since neither he nor company officials will talk about it. "Let Medical Mutual handle it," Patrick responded after hesitating to identify himself over his cell phone.

Medical Mutual "handled it" by refusing to respond to calls from Scene. In fact, after an initial inquiry, the company's head of media relations, Don Olson, and vice president of corporate communications, Jared Chaney, ignored phone calls over several days to avoid taking questions about Patrick.

And there are troubling questions about Patrick, including:

Why would the company continue its association with an employee tainted by charges of sexual harassment?

Was policyholder money used to defend Patrick or to settle the lawsuit filed against him by a former Medical Mutual employee?

Did Patrick's relationship with his brother-in-law — Medical Mutual board member Sam Miller, one of the city's top power brokers — influence his continued association with the company?

Patrick had been with Medical Mutual for eleven years when he was promoted to CMO in July 1997, joining a tight inner management circle that included President and CEO Kent Clapp, Chief Financial Officer Ronald Rafal, and Corporate Secretary Robert Trombly. More than one million policyholders were relying on them to get the company back on track following a costly failed merger attempt with health care giant Columbia/HCA. Ultimately vetoed by government regulators, the attempted merger led to a debacle that cost Medical Mutual millions of dollars, its former CEO Jack Burry, and its trusted name — Blue Cross and Blue Shield of Ohio.

With Patrick's new title came more money, a better car, and a direct pipeline into company policy and the board of trustees. In return, the former Stark County commissioner, who had compiled an impressive track record as a Medical Mutual sales whiz in Akron, Canton, and Youngstown, was expected to bring in new policyholders through the sales and customer relations departments. The work was lucrative — in 1998, Patrick was paid a salary of $270,500 and earned another $240,000 in bonuses and other compensation.

Patrick's style was bold and big, like his six-foot, three-inch frame, which allowed him to play five seasons of professional football with the Toronto Argonauts. Colleagues at Medical Mutual viewed him as aggressive and playful, quick with a joke, a drink, and compliments for the women in the office. In that sense, some observers say, he fit right in with the corporate culture at Medical Mutual. But others thought Patrick a boor, too forward and unprofessional. They complained to company officials that his actions amounted to sexual harassment.

Among them was sales employee Patricia McGuire. On January 27 this year, she filed a lawsuit alleging that Patrick sexually harassed her and that management failed to remedy the situation after learning of his behavior. McGuire, who left the company at the time of the filing, charged that, between late 1997 and October of 1998, the 62-year-old Patrick tried to force her into a sexual relationship with him, implying that she'd be promoted if she acquiesced. According to the suit, Patrick made several attempts to kiss McGuire, which she rebuffed.

McGuire also claimed that Medical Mutual knew of Patrick's offensive behavior toward her and other female employees, but failed to act. According to the suit, CEO Clapp received formal complaints from Cunard Cruise Lines and the Cleveland Indians about improper behavior by Patrick toward their female employees during Medical Mutual work-related functions.

This time, Clapp reacted quickly. Two days after the charges were filed and several days before the news broke in both The Plain Dealer and The Akron Beacon Journal, he issued a carefully worded memo to all employees: "Please be advised that Jerry Patrick will not be returning to his position as executive Vice President of Sales and Marketing. We are in the process of speaking with candidates and anticipate announcing Jerry's replacement by the close of business on Monday [February 1]."

In late February, Medical Mutual chose to settle McGuire's suit rather than fight it. (She has refused to discuss it.) And Patrick was gone, though his association with the company apparently changed rather than ended.

Board member Sam Miller claims to have no knowledge of his brother-in-law's contract. "I had no idea. We haven't had a board meeting in some time," he says.

Patrick's status should be of particular interest to the board in light of the recent indictment of Medical Mutual consultant Edward Flask, a Youngstown lawyer and former director of the Mahoning Valley Sanitary District. Flask was indicted by a Trumbull County grand jury two weeks ago on a number of corruption charges, including several stemming from payments and other benefits he received from Medical Mutual (then Blue Cross and Blue Shield of Ohio). Specifically, Flask is accused of accepting $1.7 million and 109 meals — some with Patrick — from the company while he was director of the sewer district, during which time the district entered into contracts with Blue Cross & Blue Shield. (Flask pleaded not guilty to the thirteen-count indictment.)

In March 1998, Clapp was asked by The Akron Beacon Journal what Flask did to earn all that money. "We asked him for ideas [about how to get business]," Clapp said. "He would give us ideas, often in the form of "I'll try to get you introduced.' That was especially true with government agencies."

Evidently there was a lot of business to be gleaned at the upscale Johnny's restaurants in downtown Cleveland and Ohio City, where Patrick and Flask ran up sizable tabs. Documents obtained by Scene show them meeting at Johnny's Downtown on February 7, 1997, where they enjoyed a $111 meal. On February 12, 1997, Patrick and Flask and three cohorts managed to hit both restaurants in a single day, running up tabs totaling $268.

Reportedly, Patrick was questioned during the grand jury investigation of Flask. If Medical Mutual board members truly do not know what Patrick is doing, maybe they should call Trumbull County prosecutors and find out.

Mark Naymik can be reached at [email protected].