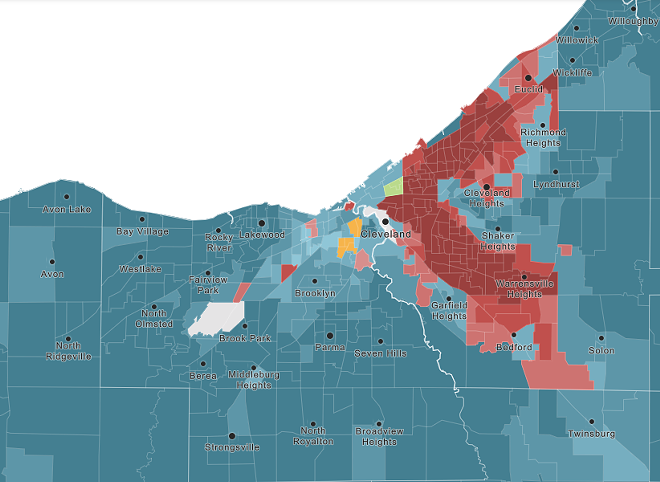 A new, searchable nationwide map from the Anti-Discrimination Center shows that despite some progress since the Fair Housing Act of 1968, residential segregation in America remains entrenched and severe.

“While it is certainly true that much progress towards integrating different communities has been made since 1968, the sad truth is that, when you’re examining residential segregation in the United States 50 years on, areas of pronounced segregation persist all over the country,” said the ADC's executive director Craig Gurian. “It is particularly striking how many areas that hold themselves out as ‘progressive’ on issues of race have high levels of segregation. And, even though some ‘advocates’ and government officials would say that this is an old-fashioned view, we don’t think that domination of an area by any group to the exclusion of any other group is acceptable — there is no ‘good kind’ of residential segregation.”

Cleveland, as you should know by now, isn't just segregated, but hyper-segregated. Scene's recent feature on income-source discrimination among landlords as a proxy for race-based discrimination provides just one of the many reasons it persists.

Segregation, and especially hyper-segregation, is at the heart of many societal and economic inequalities. The racial partition of Cleveland's neighborhoods stretches back so far now it's baked into the city's DNA, and it ties directly back institutional housing segregation.

More on how Cleveland remains behind the curve in beginning to even rectify the situation compared to other cities, from a June 2016 Scene feature:

In the late 1980s, Princeton sociologist Douglas Massey dug into census data and determined that certain metropolitan areas were not just segregated, but hypersegregated. Under the definition, these were metros where the black population is historically unevenly distributed through a region. Instead, the minority population is slotted tightly into a specific geographic area. Under Massey's rubric, Cleveland was one of the top hypersegregated cities in American.

Just last year, Massy published a report looking at whether hypersegregation still had a headlock on as many cities as it did 30 years ago. According to the 2010 census, the good news: Half the cities that had been hypersegregated back in the 1980s had shed the label, including Columbus and Cincinnati. The bad news: Cleveland is still hypersegregated. Unlike its Buckeye state brethren, Cleveland remains as racially bifurcated as ever.

Massy's argument is that the numbers game has serious, far-reaching consequences for people living here. Hypersegregation creates the kind of social and economic isolation that pools poverty and cuts off these parts of a city from the mainstream civic bloodstream, creating the harsh differences between locations separated by a 15-minute drive. Imagine the psychological blow of living close to the new buildings climbing into the Cleveland skyline in the Flats or downtown. Then imagine living on the boarded-up blocks deep on the east side that look like Sarajevo after Milosevic.

"People growing up in such an environment have little direct experience with the culture, norms and behaviors of the rest of American society," Massey wrote, going on to explain the irony that in a diverse and densely populated society such as the United States, some inner-city individuals "are among the most isolated people on earth."