The eight-episode series will stream exclusively on Spotify 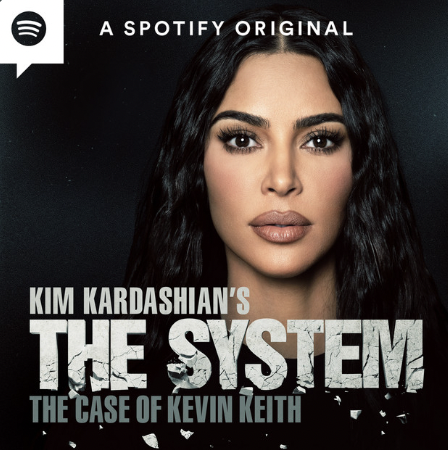 A long-awaited podcast series on one of Ohio’s most dubious criminal convictions has just hit the airwaves.

The first two episodes of Kim Kardashian’s The System: The Case of Kevin Keith are now available for streaming exclusively on Spotify. This eight-episode series will tell the in-depth story of how Kevin Keith came to be convicted of three murders in Bucyrus, Ohio, in 1994—and sentenced to death. Implicit in the wrongful conviction narrative is also an examination of what this case means for the integrity of our criminal justice system in the U.S.

While Keith’s death sentence was commuted to life in prison at the eleventh hour in 2010, his story is illustrative of the many frustrating twists and turns a legal case can take even as the defendant at the heart of the matter remains stuck behind bars. New evidence has emerged, alternative explanations have been raised, damning affidavits have been signed, and yet the system does not allow for a reexamination of the case.

Most recently for Keith, Judge Solomon Oliver of the Northern District of Ohio’s federal court in 2021 dismissed his petition for writ of habeas corpus—a 2018 petition for the court to revisit his case in the light of newly obtained, potentially exculpatory evidence.

With little to no action expected from the courts at this point, we turn now to mass media.

Television producer Lori Rothschild Ansaldi first reached out to Scene following our 2017 feature on Keith’s case. She was interested in exploring the case as part of a bigger project.

From there, Ansaldi’s team took on a tremendous amount of investigative work—probing the many strange questions raised by Keith’s conviction and uncovering powerful new information that will likely come to light in this podcast series. Kardashian’s entrance to the project brought more resources and a level of celebrity support that would elevate Keith’s story to a degree not previously seen in other media channels. As Ansaldi wrote on Instagram yesterday, “Everyone will know your name.”

The series is slick and neatly produced, with courtroom audio and archival news media footage providing a close-up account of what happened in 1994. Interviews with Keith at Marion Correctional Institution, as well as with Ansaldi and Keith’s brother, Charles, round out the present-day narrative. Kardashian is present throughout as host, carefully walking the listener through otherwise complicated legal machinations.

Having her name in the podcast title is not a misnomer; the podcast thus far very much feels like Kardashian’s own foray into criminal justice reportage. Not for nothing, she passed California’s First-Year Law Students' Examination in December 2021. Here, she introduces a massive audience to Keith himself and addresses the circuitous tale of his conviction as plainspoken narrative.

In this sense, The System appears to be a lens through which Kardashian and her team cast a critical eye on the very process (or lack thereof) of criminal justice in the U.S. This is likely not to be another boilerplate true-crime podcast series. Consider it an indictment against the underlying structure that purports to hold together our conception of “justice” in America. For anyone living in these times of civic duress, the basic plot points will sound distressingly familiar—even as they’re conveying a unique story about a single individual.

“I’m really hopeful with this podcast, just to get your story out there,” Kardashian tells Keith in the first episode, “because I think it’s so important for people to understand that our system is so fucked up.”

New episodes of The System will hit Spotify every Monday.