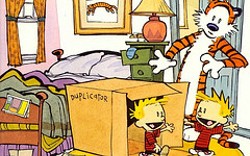 Photo Courtesy of Mpetrus001, Flickr Creative Commons
Other than the occasional side project, we thought we'd seen the last of Calvin and Hobbes creator Bill Watterson with his heart-wrenching segue into retirement in 1995, but it seems the comic strip creator and Chagrin Falls native has made a final comic comeback before returning to his life of secrecy.

Comic artist Stephan Pastis had sent in a strip to Watterson in which his character in Pearls Before Swine pretended that he was the creator of Calvin and Hobbes in order to pick up a girl. Watterson liked it so much that he offered Pastis a deal: the two would collaborate on three strips that would be sold for a charity event, as long as Pastis agreed to keep his mouth shut about it until the process was over.

Pastis agreed, and thus, Watterson's brief and triumphant return to the comic scene came to be. You can check it out here, here and here.

Cortni Dietz is a senior at Ohio University and a Scene blogging intern. When taking a break from the rigorous pursuit of journalism, she enjoys eating, reading, hanging out with dogs of all shapes and sizes and drinking overpriced coffee.
More
Scroll to read more Cleveland News articles
Join the Cleveland Scene Press Club