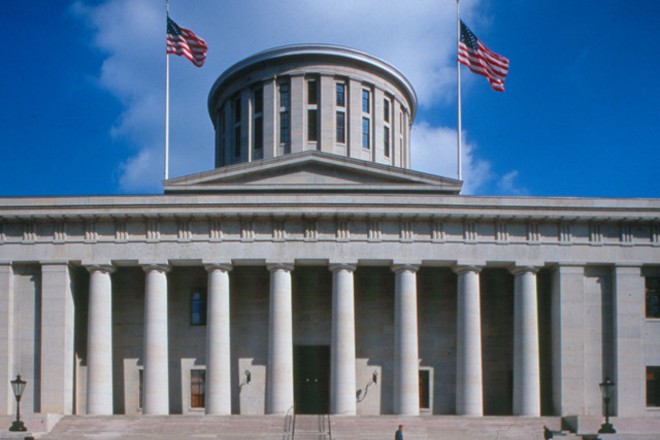 Ohio General Assembly
You can't always get what you want. But if you try sometimes and you're Ohio Governor Mike DeWine, you might get about a third of what you say the state needs.

At least, that's what the Ohio Senate told DeWine as it voted 24-6 for a transportation budget containing a 6-cent gas and diesel tax hike. That's much less than the 18-cent hike DeWine wanted and the 10.7 cents that the Ohio House passed earlier this month.

Ohio's gas tax is currently 28 cents and has been at that level since 2005.

DeWine's version of the transportation bill would have raised roughly $1.2 billion annually for maintenance on Ohio's struggling road, bridge and highway systems. The governor has argued that anything less would keep the state from addressing crumbling infrastructure and hundreds of millions of dollars in debt the state has incurred fixing it so far. The state House's version would have raised about $800 million a year and the state Senate's version raises about $400 million a year for infrastructure.

But conservatives in the state Senate wanted a smaller tax increase. Some voted against even the Senate's version of the bill in committee because it didn't include an income tax cut to offset the sales tax boost.

“We all know there are some differences, and some significant differences," said state Sen. Jay Hottinger, who voted to approve the budget. "What we are doing here is larger and more important than just a gas tax.”

The Ohio Senate's bill would also provide a smaller increase for public transportation — $55 million instead of the $100 million the state House passed. That's more than the current $33 million a year, but much less than advocates have said is needed. Ohio is near the bottom when it comes to state funding for public transportation, and the Central Ohio Transit Authority has said the state needs to provide at least $125 million a year to begin addressing its public transit needs.

Ohio Sen. Tina Maharath of Columbus voted against the bill because of the smaller boost in transit funding.

“Public transit is the future," she said in a statement. "Regardless of your age, hometown or income, more people want to use public transit to get around. If we actually funded our public transportation systems, we’d reduce traffic, keep our roads in better condition and cut our carbon footprint.”

The Senate's version of the tax hike would have it kick in July 31. The House's bill would have been phased in over three years.

Another change: the Senate version strikes a move by the House that would have removed requirements that drivers in Ohio have a front license plate.

DeWine obviously isn't happy with the Senate's version, but told reporters yesterday that he's going to let the process to reconcile the bills between a conference committee made of House and Senate members play out. They'll need to come to an agreement by March 31, the date the Ohio Constitution requires the transportation budget be on DeWine's desk.