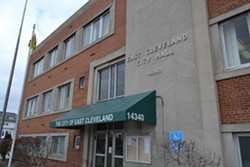 DOUG BROWN / SCENE
East Cleveland City Hall
The sixth episode of Serial's Cleveland-based third season was a tough listen. It focused primarily on the city of East Cleveland and the aftermath of a police brutality case there. The victim, a man named Jesse Nickerson, appeared to emerge victorious after the two cops who beat him up in Forest Hill Park were held criminally responsible, but Nickerson suffered enduring consequences in the community. His case will continue in tomorrow's episode.

The story of Jesse Nickerson was preceded by another case of police brutality in East Cleveland, one involving a man named Arnold Black. Black's case appeared to have a triumphant ending as well — a jury awarded him $22 million in damages — but that decision was thrown out by the Eighth District Court of Appeals. And today, the Ohio Supreme Court decided not to hear Black's appeal, meaning he won't see damages for his heinous treatment. Cleveland.com's Cory Shaffer reports on the decision here.

Black was driving on Euclid Avenue in East Cleveland back in 2012 when he was stopped by two East Cleveland officers — a uniformed cop and a plainclothes detective — who cuffed him, aggressively searched his vehicle for drugs and then beat him up when they realized he wasn't the guy they were looking for. (Black's head was injured so badly that to this day, he has to get his skull drained of excess fluids. His memory is poor and his personality has changed, his relatives say.)

After his beating at the hands of officer Randy Hicks, Black was taken to the East Cleveland jail and shoved in a storage locker — basically a cleaning closet — where he was held for five days without a bathroom and only a single carton of milk for sustenance.

When he was released and all charges were dropped, Black lawyered up and sought a settlement. The city of East Cleveland did not furnish any documents to Black's attorney during the pre-trial period and was barred from presenting evidence at trial. The city didn't even bother showing up. Only officer Randy Hicks, who'd resigned from the force, came. He testified on Black's behalf, admitting that the use of force by East Cleveland officers to "compel information from witnesses" and to "instill fear and submission" was standard operating procedure.

A jury awarded Black $22 million, but that decision was vacated by the Eighth District Court of Appeals. In its ruling Wednesday the Supreme Court said it didn't have jurisdiction to take up the case.